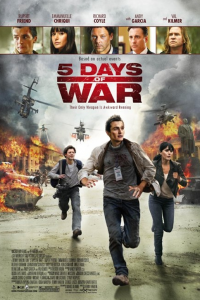 “5 Days of War”, the new film directed by ex-action mainstay Renny Harlin (“Die Hard 2”), is a loud, somewhat entertaining action picture disguised as an important political statement. Set during the brief and brutal 2008 conflict between Russia and Georgia, it’s one of those movies that begins with a quote, followed by a declaration of being based on actual events, followed by a dedication to journalists who have lost their lives covering wars, followed by a few hours of things blowing up and guns being fired.
The story follows a war reporter and his photographer’s trek through the hot zones of the impending skirmish. After capturing a massacre on a group of Georgian villagers, they race to get their tapes out to the public. Unfortunately, no one in the news media cares about the little war across the pond, and some mercenaries do care very much about that tape not getting out into the world.
Basically, “5 Days of War” is a straight action flick. There’s some romance, a hero with a troubled past, a couple of mustache-twirling villians, and a screaming President (played badly by Andy Garcia) fighting to save his country. If you are looking for a valuable piece of insight into a violent piece of history, look elsewhere. This film was possibly produced in part by Georgian funds serves as fairly obvious propaganda. That being said, if you’re looking for things blowing up, then “5 Days of War” may provide you a small entertaining diversion.

Rodney Crowell, in concert, at ACL Live @ The Moody Theater
Next