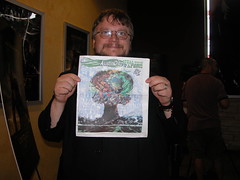 These are the words of the great Guillermo del Toro last night after he filled an innocent volunteer’s unsuspecting mouth with a concoction that included Tequila, soda water, Tequila and more Tequila, shook his head from side to side and then launched him forward off his chair back out into the dark theater. These are also the words that might best describe Hellboy II, a collaborative creative explosion that is sure to bring animators and puppeteers to their knees. If you are a Pan’s Labyrinth fan (find me someone who isn’t and I’ll try and find you a sentence for which Mr. del Toro doesn’t use the word “fuck”) you will love this film. If you are a Hellboy fan, well, he’s in it too but that’s almost entirely beside the point. 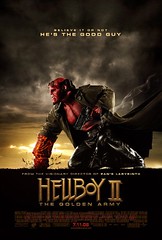 I’m fans of both and for that reason, am not entirely sure where to begin. The sequel picks up with Hellboy and Liz living in not so domestic bliss: Hellboy hasn’t figured out what it means to live in co-habitation and Liz is at the end of her fiery rope. She is more temper than flames. Without a clear mission she doesn’t seem to have a reason to spark (and besides the one or two flare ups, never does). As for Hellboy, ’tis the season of superhero-identity-crisis and he is no exception. When we first met Hellboy he wanted us to know he was human, so human that he would kill any mutant that crossed his path. Now he’s not so sure. Something is happening to him; he’s changing (when he has his villain on his knees he tells him, “I win. You live” Hellboy? Is that you?) It’s a dramatic shift for Hellboy. He doesn’t know what he wants and like many a human, he grabs a six pack of Tecate and lays low while he tries to figure it out (as low as you can when there is a prince of the underworld trying to destroy all mankind).

While Hellboy is mostly hanging and brooding, a stunning assortment of creatures are free to take cinematic center stage. They are ingenious manifestations of strangeness and perhaps the strongest part of the film. The sheer skill and detail that goes into creating this fantastical world is mind blowing. A nod to the Cantina in Star Wars, the Troll Market is a dazzling display of talent; the details are remarkable. There are also wicked tooth fairies, the cutest little things until they open their mouths, the Elemental—“the giver and taker of life” a fascinating forest-like creature you have to see to believe, an Angel of Death—brilliantly haunting. And of course, tentacles abound (del Toro is a huge fan).

If you’re comfortable with Hellboy in introspective mode, you’ll be fine. If you want him to leave the messages on the environment, life, fatherhood to someone who should really care, and stick to blasting shit in between witty one-liners, you might find yourself kicking the back of the person’s chair in front of you. One thing is for sure: this film is a work of art. And like a Picasso or Dali, it’s got Guillermo del Toro’s signature written all over it. It’s up to you to decide if that’s a bad thing.

3D Rollercoaster to the Center of the Earth
Previous