Edge of Darkness Has No Edge 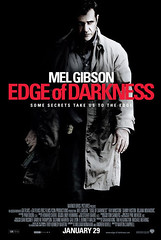 Jesus, what a waste of time. I was actually giving the bird to the screen, midway through. It started off pretty cool but it soon became a rehash of   revenge pictures. Where are the original ideas?  Along the same lines and well done was a film called “TAKEN.”  Save your money and time and skip this. Mel was sleepwalking through this. Some folks actually applauded when the credits rolled. I was grateful also.  The talent and money wasted could have done better.  Maybe I’m harsh, my friend that was there didn’t feel negative about it. Maybe I missed something? Ray Winstone was awesome and saves what he can of the film.  As it stands, the story was a rehash and poorly executed. I just did not give a toss……………………. I’m owed a few hours of my life back.

Vallejo@ Saxon Pub in pics by kyle woods
Next