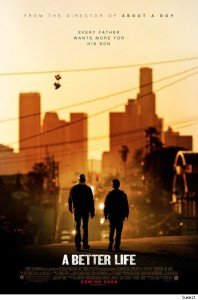 We are all born into this world as complete human beings. Along the way we are confronted with adversarial situations that tempt us into compromising our values, our morals, and many fall prey to these types of situations and emerge less than what they were, or could be. Then there are others who steadfastly meet the challenges of life with dignity, with honor, to make this world a better place for themselves and others. “A Better Life” is the story of such a human being.
A simple hard working gardener, also an illegal alien here in this country, is caught in a struggle to raise a son as a single dad while working to build a future that will be better for the both of them. The father is all too aware of the gang community and does his best to impress upon his son the value of hard work, always maintaining how the advances he makes are for the both of them, not just himself, something the boy questions, confusion riddling his everyday, distancing himself as he does from the quaint notions of his father, a part of his and every other teenager’s rite of passage into adulthood, really.
An opportunity arises which enables the father to take some bold steps in seizing the moment for he and his son. All appears good for the both of them, opportunity has been granted them when tragedy strikes, and suddenly the man’s very existence to care for he and his son is shattered. However, the man doesn’t give up and does his best to reclaim his life lost. The struggle he endures is heartbreaking, especially given his illegal status.
This movie is so well done, so well acted, you feel as if you are peeking into someone’s private life. The trials and tribulations they endure are fairly predictable in nature, but very believable given what these people struggle with every day. The father is determined to set the proper example for his son, no matter the cost; what a great father must do every day of his life, to live by example for his children, a distinctly human quality.This film succinctly portrays the difficulties of being an illegal, especially in light of the ongoing battles in politics, our post 911 world, to render them as something less than human. This movie shines a very bright light on the fact these people are very much human, too, something I think we Americans tend to forget as we’ve never known anything but opportunity, entitlement and freedom. Clawing your way against staggering odds from misery and poverty to make a better life for you and your family is no easy task, and as this film portrays, their lives hang in the balance every second of every day as they live outside the law, so they are subjected to the most heinous of acts given no laws protect them here. There are sharks of every color and nationality laying in wait to prey on them, everywhere they turn.
Even though far from the typical all’s well that ends well ending, you will leave the theater feeling invigorated knowing the power of staying true to your internal moral code. This man‘s struggle is far from done, but in the face of tremendous adversity he never wavers and stays true to his core beliefs, his values, a valuable lesson in these modern times.
“A Better Life” isn’t a movie I would have normally attended, but it reinforced the power of making good, sometimes hard, painful decisions instead of trying to get over by any means possible and necessary, taking the easy way out, which always comes with a terrible cost. And a movie that espouses and champions such a notion is all right in my book. A story that need be told in these violent and difficult times where a bad decision can affect not only your life, but have a ripple effect upon many.
“A Better Life” left me a better person, and that, my friends, is the power of good cinema.A Better Life – Trailer

Hey there daze readers
Next