A Comedy of Bad Manners 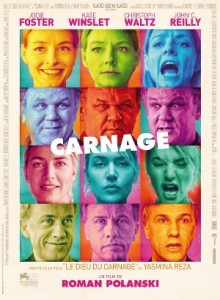 “Carnage” opens in a park with a group of kids taunting one lone boy who walks ahead, trying to get away from them. He takes their crap for a bit, then picks up a stick and swipes the leader of the pack in the face with it. Cut to:

Four tight-jawed parents are crammed awkwardly in a home office awaiting the final printing of a document they’ve agreed upon, which puts the responsibility of the incident squarely on the stick-bearing boy, and leaves the bully blameless. The elephant in the room being that this is the most expedient way to avoid a lawsuit.

The mother of said stick-bearer is played by Kate Winslet, who is ever so apologetic and says all the right things with such precision and care as to make it abundantly clear they were rehearsed, probably in the car on the way over with her spouse (Christoph Waltz), who has a harder time concealing his contempt for these proceedings. Jodie Foster plays the mother of the boy who was struck in the face, an unbearably strident woman who takes every opportunity to blow the incident out of proportion while her affable husband (John C. Reilly) goes out of his way to smooth things over with his aw-shucks good-natured demeanor.

What follows is an afternoon of tea and crumpets (so to speak) that devolves in ways I wouldn’t dare give away. Suffice to say the following: you’ve never seen Kate Winslet do THAT before.

“Carnage” is a “comedy of manners” in the truest sense, a theatrical genre defined as “a play which satirizes the affectations of a social class.”  And, man, does it ever. Taken from Yasmina Reza’s play “God of Carnage” which began in Zurich and then went on to take London and Broadway by storm, the film stays true to its theatrical roots giving us a claustrophobic afternoon with well-mannered jerks who only need a bit of needling and some booze to start letting the cracks show in their lovely facades.

The staginess of the premise probably feels just about perfect in a live rendering of the material (I have not seen the play) but on film, it creates a problem. As things devolve, however shocking and hilariously, one begins to wonder why the visiting couple doesn’t just leave. In fact, by the time Kate Winslet utters the words, “Why am I still here?” the audience has been wondering the same thing for a long time. Such contrivances can be forgiven in a staged play where there is a certain suspension-of-disbelief built in to the experience. But film is less forgiving. The result is that the very short running time of 79 minutes is nonetheless difficult to sustain.

One can see that Roman Polanski directed and co-wrote the film with this dilemma in mind.  Pains have been taken to address the issue with characters running out to the hallway and waiting for the elevator, only to be coaxed back in so they can smooth things over. But still, the confines of this premise don’t quite work on film and the story inevitably loses steam before the credits roll.

What’s worth watching here are the masterful performances by the stellar cast. Christoph Waltz steals the show with the best sardonic zingers this side of the Algonquin Round Table. Kate Winslet’s overly mannered performance is just right for a woman who is all about keeping up appearances (though her American accent is distractingly exaggerated.) John C. Reilly milks his laizzes faire persona enough to make it truly shocking when he finally lets his guard down and spews some of the most politically incorrect dialogue uttered on film in a while. Jodie Foster’s performance is the most perplexing and perhaps the most triumphant. Her character is unlikeable from the get-go, wound so tightly that she could snap at any moment (and does). In the early sequences, her jaw is so clenched that one wants to hit her in the face with a stick, too. Just watching her makes you tired, so in her case it’s a relief when she finally falls apart.

The writing here (apart from the aforementioned stuck-in-this-room-together dilemma) is phenomenal. Loyalties shift between the married couples, to a battle of the sexes, and back again. As the façade crumbles to dust, these upper East side know-it-all types devolve into behavior that would put the kids on the schoolyard to shame. This witty, insightful, and downright pitiless dark comedy is not for every taste, to be sure. The key word here is dark comedy.

The epilogue with the children on the playground provides a book-ended effect which seems needed in order to create some closure, leaving the film on an upbeat though incongruous note. Don’t head for the exits until you find out what happened to the hamster.

A Hot Mess
Next