A film bad enough to cause a career change……….. 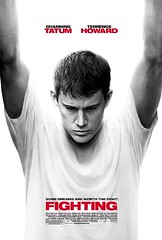 To say or even think that I could do better would be superfluous. My cat who can be found snoozing in an array of positions, whiich have more conversation value and significance than the garbage I just sat through could make a better film. Oh god…..
I don’t normally do bad reviews. What’s the point? I mean if a film is bad, everybody on the inside already knows it. How could they not? And the film will get blasted by review sites and other papers. I’d rather talk about good things;tell a joke, make people smile or laugh or even cry
I had a choice between two screenings tonight; “The Soloist” and “Fighting.” I went with the latter. I chose badly.
Luckily, this flick screened at the Alamo Drafthouse, so I got to focus on a chocolate shake. They should make a super size for lame movies.
It’s hard to say where this picture went wrong. It is better to say where it didn’t go right. Nothing went right. I have seen better Van Damn movies on the same subject.
Bad movies are depressing to me. When you think of all the wasted talent involved. They all could have done something with more meaning. Did the creators not watch it while editing? Why did they have a press screening? Was this a joke on me? That’s it. I’m not gonna be negative anymore. Besides, my cat and I have a meeting in a few minutes to bounce story ideas around. We will see where it goes!