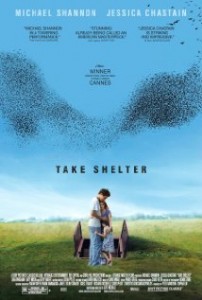 “Take Shelter” is either about a man losing his mind, or a man saving his family from a coming storm that brings with it motor oil raining from the sky, pets and friends gone mad, and destruction unlike anyone has ever known. The former certainly seems more plausible than the latter, and therein lies the film’s central drama.

Michael Shannon (“Revolutionary Road”) plays Curtis LaForche, a good man who loves his wife and daughter, works hard, and has the respect of his friends and community… until the dreams begin.

Soon, Curtis begins seeing visions of the storm even during waking hours. This is particularly troubling because there is a history of schizophrenia in his family, and he feels trapped and alone with this problem, afraid to tell his wife that he may be developing the very disease that put his mother into a lifetime of institutions. Although Curtis makes many questionable decisions, Michael Shannon’s intense charisma helps create a haunting portrait of a tortured man who never loses our sympathy.

His wife, Samantha, is played with remarkable wisdom and empathy by the up-and-coming Jessica Chastain (“Tree of Life”, “The Help”). Ms. Chastain’s performance is so wrought with gentle subtext that she calls to mind a Cate Blanchett, or yes, even a young Meryl Streep. At every turn, we understand her motivation and inner thought process perfectly, without it ever spoken aloud. Her performance is so earthy and real that it’s hard to imagine it was scripted at all. But scripted it is, and wonderfully so. What a treat to see the “wife of a troubled man” role not played for the harpy or long-suffering do-gooder. She is relatable and stands in her own integrity every step of the way.

Kathy Baker’s memorable turn as Curtis’ mother in a singular sad scene gives us a great deal of insight into his insistence on secrecy.  But while Curtis explores the possibility that he’s losing his mind, he simultaneously begins preparing for the storm in bizarre and disturbing ways that threaten his family’s security and all of his relationships.

This is director Jeff Nichols’ sophomore effort, after the well-received “Shotgun Stories” (also starring Shannon). Nichols exudes self-confidence in his framing and shot choices, allowing subtle camera movement to create a slow, creeping sensation in early sequences, and a gut-wrenching foreboding in the vast, darkening skies. The suspense works in a literal sense but also as an allegory for our times, with Curtis portraying the every-man stricken with a sense of impending doom and helplessness in the face of vast and powerful forces.

“Take Shelter” builds to a climax that defies Hollywood conventions, so don’t go in with pre-conceived notions. Just let it take you where it will. This is not a fast-paced thriller by any means, but it is darkly compelling and has haunted this reviewer long after leaving the theater. It will be among the best of 2011.

Odds Are You're Gonna Love It
Previous

Dying Young... With Pretty Lighting
Next