“A Lonely Place to Die”, a Fantastic Fest review 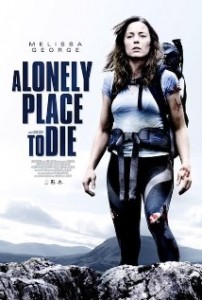 Director Julian Gilbey’s “A Lonely Place to Die” is part wilderness survival story, part crime drama. It is effective at both. The action begins with a harrowing mountain-climbing sequence that sets the tone for the first half of the film. A group of friends have gone hiking and climbing their way into remote territory. When one of them hears a cry in the woods, they investigate further to find that a little girl has been buried in a shallow box just beneath the ground. She was given one bottle of water and an above-ground pipe for breathing. Clearly, someone had a plan.

The hikers don’t wait around to find out who may be coming for the girl. They quickly strategize the best way to get her to safety and call for help. Unfortunately, things go horribly awry when the culprits realize their ransom scheme has been interrupted. The wounded and unarmed hikers soon find themselves hunted in the wilderness like animals.

Strong performances from the ensemble cast add emotional resonance to the inherently suspenseful action. Melissa George (“30 Days of Night”, “Grey’s Anatomy”) plays Allison, the natural leader among the hikers and the most heroic of the group. Ed Speelers (“Eragon”) plays a much more reluctant hero but ultimately a willing participant in the quest to save the girl. Sean Harris is particularly memorable as the steely, soulless monster who put the child in the ground.

The script is full of genuine surprises and suspense, and the director allows each location to become the centerpiece of the action: rugged mountain terrain, an exotic village festival, a modest house engulfed in flames. Each in their own way presents new dangers and challenges for Allison and the girl as they struggle to stay one step ahead of the kidnappers.

“A Lonely Place to Die” grabs your attention very quickly and holds it to the end.

"Melancholia": It's headed right for us!
Next