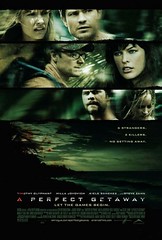 I found myself thinking of the quirky and slightly disquieting Southwest Airlines commercials after the first 5 minutes of this film.

David Twohy’s less than “Perfect” offering opens with Cydney (Milla Jovovich) and Cliff (Steve Zahn), a painfully blissful pair of newlyweds at the beginning of their painfully typical and touristy honeymoon in Hawai’i. Cliff is apparently an up and coming screenwriter, and Cydney is his nauseatingly adoring new bride. As fate (or your typical Rouge film) would have it, another honeymooning couple on a neighboring island has fallen victim to a particularly brutal demise by what is believed to be….you guessed it, ANOTHER young couple posing as honeymooners.

On their trek through the Hawaiian jungle paradise, they happen upon two other couples, first the twitchy, dodgy and generally ominous pair, Kale and Chloe. Chloe is about six dreadlocks shy of an 85 IQ and Kale is a burly, brooding surf nazi type who has a serious chip on his shoulder for a guy named after a leafy green. Cydney and Cliff’s initial encounter with these two does not bode well, and although we have our first two murder suspects handed to us on a platter…..we go on hoping that the story has something else in mind.

Further on up the treacherous coastal trail they run into Nick (Timothy Olyphant) and Gina (Kiele Sanchez), an oddly matched pair but slightly less foreboding; Nick being the product of a special ops team from the Gulf War with a penchant for goat-on the-barbie…..Gina is the white-bread, homegrown gal from the South that was swept of her feet by Nick’s ability to conveniently conceal an entire makeshift armory through airline security, under the guise of a state of the art “ty-TAY-ne-yum” plate holding his skull together.

Second course of possible suspects served up for your viewing pleasure!

After a bit of skinny dipping and a few feeble attempts at giving Cliff and Cyd that fleeting opportunity to turn back and keep the rest of the movie from ever happening, the intensity of the film begins to rise to relatively tolerable levels and the countdown begins to the big “which crazy couple is the couple who killed the other couple and is now ready to kill one or both of the current couples in a fantastical show of coupled brutality” reveal.

The twist is slightly jarring but not in the “Crying Game” sort of way, and if you arent too sensitive at having your intelligence slightly insulted, this flick is for you! Olyphant’s performance as Nick is by far the redeemer of the film. His rougish charm and dark comedic relief is a solid reminder that you didnt just buy that six dollar hot dog that won’t expire until 2012 for nothing. Its a wide departure from his quiet intensity as Sheriff Bullock in “Deadwood”, but he pulls it off with spectacular flair. I’d say save your pennies for that lovely trip to paradise you’re planning, but if youre as pissed off about Deadwood ending as I was….you can get a heapin’ helpin’ of Olyphant’s acting prowess right here.

Bandslam Is Not a Grand Slam
Next