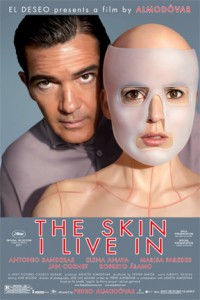 You are either a fan of the audacious filmmaker Pedro Almodovar, or you are not. For the uninitiated, this is as good a place to start as any. “The Skin I Live In” is beautiful, grotesque, sly, melodramatic, and altogether unsettling.

Antonio Banderas plays Robert Ledgard, a well-meaning plastic surgeon, who becomes tortured and obsessed by tragedies that lead him on a path of medical experimentation. He creates a tough, human-animal hybrid skin that can withstand injury. Such a medical wonder needs a human guinea pig, and he just happens to have one: a beautiful woman being kept prisoner in his home (played by Elena Anaya). Who is the prisoner and what is her relationship to the doctor? I promise, you’ll be surprised.

“The Skin I Live In” takes more than one twist and turn and always keeps you guessing, intrigued, engrossed, and frankly, a bit queasy. In fact, the more that’s revealed about what’s really going on in the doctor’s sprawling home, the more creeped-out you get.

The entire cast performs admirably, particularly Marisa Parades as housekeeper, Marilia. She has plenty of her own secrets, and her misguided loyalty to the doctor makes her the Igor to his Dr. Frankenstein.

The unspeakable acts are happening on gloriously beautiful grounds. Vibrant colors and lush scenery abound. There is a universe within and a universe without; a beautiful exterior, and something else entirely going on inside, beneath the surface, behind closed doors. A good director and his crew know how to use surroundings as a metaphor for the story’s central theme.

Almodovar is at once a fan of old-fashioned filmmaking (those lost stares into the distance as the scene fades into flashback, the detailed extravagance of sets, knowing looks and mysterious glances), but he’s also an innovator, playing with timely ideas: Who are we inside of our skin? How much of our exterior defines us? How much of our exterior dictates how others relate to us? What are the limits of science, and to whom do we entrust them?

The look of the film, the thought-provoking themes, and the stomach-turning plot twists are worth the ticket price. Think “Frankenstein” with weird sexual twists and you’ll have some idea of what you’re in for.  If you love Almodovar, you’ll love this one. If you hate him, you’ll hate it. If this is your first Almodovar experience, you’ll come away knowing without a doubt which category is yours.

Better to Have Loved And Lost...
Previous