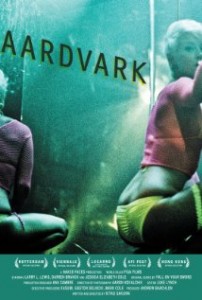 Kitao Sakurai’s directorial debut, “Aardvark,” is an awkward attempt at a slow-burn crime thriller that stars a blind, recovering alcoholic Jiu Jitsu student as a blind, recovering alcoholic Jiu Jitsu student. That’s right: lead actor Larry Lewis Jr. plays himself, and he embodies all of those disparate characteristics in real life, but unfortunately a man who is probably quite interesting in reality becomes less so when dropped into a neo noir exercise so rife with cliché that it borders on parody (and not in a good way).

The film begins promisingly with an intriguing opening sequence followed by a series of getting-to-know-you moments that include an AA meeting and Larry’s first visit to a Jiu Jitsu studio where his instructor, Darren, espouses non-violent philosophies and techniques intended to “subdue” potential assailants rather than hurt them. One might think that Larry’s addiction and Darren’s philosophies might come into play later when the action picks up, but one would be wrong.

In fact, “Aardvark” feels like two different movies. I would love to see the movie that is set up in the first half, but alas, I had to watch the rest of “Aardvark” instead.

The first sign of trouble is when Larry begins “hanging out” with his instructor buddy and they (naturally) go to a strip club where Darren (naturally) has a stripper acquaintance (naturally) named Candy. Yes, just that quickly something seemingly original at the outset shifts drastically into rote territory.

It seems the peace-loving instructor Darren isn’t so peaceful and loving, after all (though he does share an intimate moment with a body pillow.) Darren is into some shady shit, and we’re never let in on the details but that doesn’t really matter. He’s got a pissed-off crime partner (or some such) and lo and behold, Darren winds up dead. Our man Larry finds him on the floor covered in sticky stuff that he wisely concludes is blood. And thus begins Larry’s rampage of revenge. That’s right. It’s not that someone killed his family, or his one true love, or stole his life savings and left him homeless and starving. Nope. His martial arts teacher dies. Is it just me, or does this seem like a pretty low threshold for bloody revenge?

Anyway… suddenly Larry (a formerly jovial guy) is pushing chicks around in bars and talkin’ wise to baddies and using his Jiu Jitsu skills in utterly non-peaceful ways to force our gal Candy into helping him go after Darren’s killer. I can’t help but note that Larry is wearing tan khakis, a starched blue button-down shirt, and white sneakers while he’s doing all of this.

Weirder still, after several false starts on the trail of Darren’s killer, Candy just suddenly gives him a name (out of the blue) and Larry robotically goes about the business of blowing the guy to Jesus. It’s unclear what we’re supposed to feel when a character we thought we knew does things we thought he wouldn’t, and the comeuppance is exacted upon a baddie that we’ve never met before, don’t know anything about, and have no rooting interest in seeing suffer.

“Aardvark” is to film noir as paint-by-numbers is to Picasso. You can follow the “rules” and move from point A to point B, but without any nuance, shading, or soul, it definitely loses something in the translation.

Ironically, it’s the role of Candy-the-stripper that offers the film’s best performance. Newcomer Jessica Cole manages to turn in a believable performance in spite of the bad writing and acting that goes on around her. Here’s hoping the filmmakers who see “Aardvark” at festivals give her the chance to shine in something more worthy.

It would be lower, but there’s a WTF Factor that can’t be denied.

The Truth Goes Up in Flames
Previous