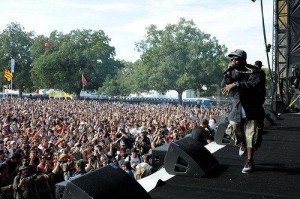 Austin TX – So, finished up an interview with a famous musician, and now armed with that kind of ZZ Top “I’m bad, I’m nationwide” attitude, I ventured over to the Budweiser stage to catch Big Boi and see what was going on.  One of the best decisions of the young ACL day.  Big Boi brought it man.  Not only did his band sound tight, but the whole vibe in and of itself was the thing that really impressed.  It didn’t matter that I didn’t recognize some of the songs, because it wasn’t like that.  No, the scene was a good time.  Saw more people dancing at this gig than at some of the other shows I’d strolled by earlier.  Big Boi and his scene was a party.  The perfect time of the day too.  You ever have that kind of a groove when things are hitting on all cylinders?  I was feeling that.  Should’ve played the lottery.  Anyway, I ran into some girls I know, who happened to know some other cute girls, who happened to be selling beer at one of the many beer bars nestled throughout the park grounds.  Did you get that?  Bar 6 I think it was.  I digress.  So, with the music of Big Boi and his band flowing some funky rhymes at the crowd, the scene, the smiles, and of all of this controlled chaos going on, we were all dancing as if auditioning for a rap music video.  Hilarious. Did I mention that the day was almost as gorgeous as the women I was dancing with?  See, told ya.  Good times.  Big Boi and his band soon segway into “I Like the Way You Move”, and right then, it made it cool to be at ACL that day, made the crowds seem non existent.  A perfect storm.  Weak cliche, I know, but you’re visualizing it right now.  You aint got to lie Craig!  Figure out what movie that line came from and let me know.  Wearing black, Big Boi shouted to the crowd, “I done wore the wrong damn clothes today”.  Hilarious. It was hot.  Big Boi and his band were way cool though.

"Extraterrestrial", a Fantastic Fest review
Next