Austin TX – Zilker Park had that thing going on.  Again.  Walking up to the park, you could hear the music, see and feel the excitement in passerbys telling everyone within earshot of the bands that had to be seen, and what stage to catch them on.  Gorgeous women everywhere. No doubt, ACL 2011 was on.  I had a plan too. 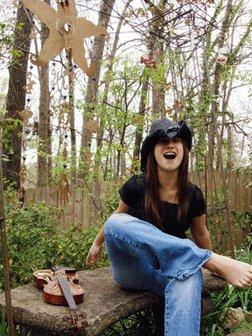 My ACL experience started out very cool.  I had the pleasure of interviewing the up and coming Ruby Jane.  She’s already there in my opinion.  If “there” defines a musical force to be reckoned with, then yeah, she’s there.  The hot and talented fiddle player born in Dallas, yet from Mississippi is more like the artist of the moment.  She can play several instruments, she writes and sings her own songs, and she does it with all the whimsy of a seasoned pro.  Oh, and now she lives in Austin.  I found that to be an interesting geographical path, especially from that of a professional musician. Playing with artists like Willie Nelson, Bob Schneider, Asleep at the Wheel to name a few,  Ruby Jane has honed her musical chops and moreover, has developed a sound and style all her own.  For such a young artist, to have musical heroes like Tom Waits, John Lennon, and even Keith Richards, I was intrigued with this kind of musical depth.  As the interview progressed, Ruby Jane the fan, the person, and the artist began to surface, sharing her insights on a variety of topics; the music business, the packaging of artists by music labels, free online music vs. CD sales, touring the northeast in the fall, and writing her own songs with her new band.  Impressive.  While all these things shape the person, make no mistake, Ruby Jane’s gift is her music.  I asked about her sound to which she replied, “alternative” and after seeing a live Ruby Jane show; huge fan now.  To quote Ruby Jane, “I play the fiddle like a guitar”.  She does.  I count that as the coolest quote of the day as I am certain, that somewhere, Charlie Daniels was smiling.  The second coolest quote from Ruby Jane?  It had to be when I asked her if she ever got “butterflies” before going onstage with all of these established Grammy winning artists two and three times her age. Ruby Jane’s reply, “not at all, it makes me happy”.  That’s it, that’s why we play the game.  To go see a live performance from an artist onstage in the moment, and having fun while doing it.  Good times.  Told you Zilker Park had that thing going on.  Again.  Well played Ruby Jane, well played.