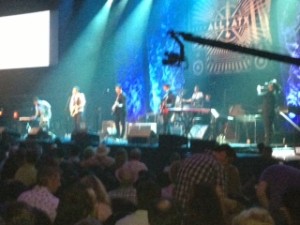 For the first time since I have been wrangling Russ  there were no press credentials waiting for us in will call. After being shuttled back and forth between the regular will call and HAAM’s table, the staff was kind enough to let us in but in the very back row on the right. Not the usual rock star/VIP treatment that Russ is used to. ( IT WAS HAAM DAY, SO, IT WAS ALL GOOD) We listened to a two song set by Quiet Company who sounded great and bam!…that was it!…out came Jody Denberg and he blabbed in between the super short sets….so that was the format…two songs and on to 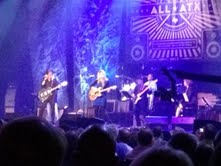 the next one. Next up was Charlie and Will Sexton who played two songs with an Austin all star band. Our leader Russ was unhappy with his seating and decided to make a break for it and wheeled off to the area in the center where the sound board and photo area was. KLRU was taping the show and there were all kinds of large manned TV cameras as well as robotic ones. Apparently Russ’s escape to a better viewing area was noted by the authorities and they came to me and said he was blocking acess and go get him and stay in our assigned seat way in the far back. Considering they never found our tickets I guess we were lucky not to get thrown out all together. I moved into 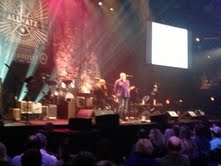 an empty seat near the center to take a few pics from different angles. When I sat in the center I noticed that when Jimmie Vaughn and Lou Ann Barton played the sound quality was terrible…very loud and grating! The last few shows I saw at the Moody ( Buddy Guy, Lyle Lovett, etc.)….the sound was dead perfect…this hurt my ears! Alas, this went on all night. I realize that it is a tough job when 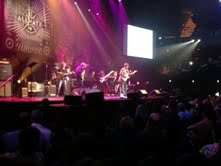 multiple acts go on but it continued on. The lovely Suzanna Choffel was next and did the best two songs of the night with Charlie Sexton on guitar. I went upstairs to take some pics from a new angle and saw Carolyn Wonderland and Guy Forsyth do two intense and “too loud” songs. The next pairing I thought was bizzarre for an “all Austin” showcase…Shake Russell…OK …and Michael Hearne who is from Dallas but I consider a Taos, New Mexico artist….I have seen him there many times and like him fine, but with all the great Austin players what was he doing here? Then at the end of his song he played the worst “piece of shit” out of tune solo I have ever heard in public! The sound was cutting in and out so I don’t know to blame him or the sound man…it was dreadful!! I look forward to seeing this on the KLRU show to see what they do with this turd of a solo…I realize great running backs fumble the ball every once in a while, but I wish I was closer so I could have launched a ripe tomato at him…poor bastard…I know he is better than this. Then it was smooth sailing with uneven sound but great playing by Monte Montgomery Marcia Ball, Van Wilks and the sweet singing Malford Milligan., Then Eric Johnson came out and I was struck by the fact that he must be in his 50’s but he looks like he is 25 years old! He must either be a Vampire or got a deal on Michael Jackson’s Hyperbolic air chamber after he croaked! Creepy…Jackson Brown is the same way…perhaps they are Aliens…Eric dragged out Malford to sing with him and he put on a good show….a portly but awesome Christopher Cross closed it out with a 3 song set ending with “Ride like the Wind”. Overall, a fine sampler of Austin music with annoying sound. Near the end Russ texted me and we broke for “stage right” and he was ensconced in the VIP section for the last few songs. One of the most impressive thing I observed at the show was the amazing robotic cameras at the show…this camera on the end of an amazing telescoping arm had incredible range and appeared to be a giant smooth snake that moved all over the stage and above the audience…you can see it in my first pic…it is hard to explain how it flew around the room like it did. So in the end Russ made it from ” chump” seats to where he could tickle Jody Denberg and Suzanna Choffel after the show. Another night of live Austin music… Ken Miller

MACHETE KILLS AT FANTASTIC FEST
Next