An Afternoon With BettySoo 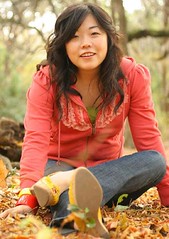 BettySoo is a singer/songwriter with a large voice and an even larger musical spirit. Austin Daze got the chance to speak with the Texas girl about her upcoming album, family ties, and what she could have ended up doing if she wasn’t hypnotizing us with her songs.

AUSTIN DAZE: I’ve read that people are usually surprised that someone with a Korean heritage is creating the songs that you do.  How do you feel about that and do you have a Korean fan base?

BETTYSOO: Sometimes, people are surprised. I guess it doesn’t fit the Asian-American stereotype – straight A’s, law school, medical school, etc. But it hasn’t really been a big deal. Right now, my Korean fan base consists of my parents, my family, and a couple of friends from childhood. I don’t really have an Asian-American following, but I wouldn’t have a problem with having one!

AD: You’ve also mentioned before that your family is very musically inclined.  Did you all ever want to start a family band?  Like the Partridge family?

BS: No, no family band dreams. My family is very musical though. My mother has a beautiful alto voice, as do my sisters. My sisters all play instruments wonderfully, but it’s always been something for personal enjoyment. My oldest sister Ashley has a degree in music composition – she is really an exceptional pianist and musician. All of my sisters are exceptional musicians, to be honest. My other older sister Helena will be singing with me when I’m out in L.A. this summer.

AD: You’ve tried on many instruments.  What made the guitar the one for you?

BS: It was the only one I didn’t stink at. Well, besides the flute – but I don’t really care for the flute.

AD: Do you ever think about what life would have been like if you had become an English teacher instead and is your family happy with your musical career choice?

BS: Sure I do. I think I would have made a good creative writing teacher in the right environment. But I am glad I’m doing music – and my family is too. They’re all very supportive – they come to shows when I’m playing in their town, and they tell people about me, buy my CDs as gifts to friends – it’s great.

AD: On your latest album you worked with Gurf Morlix.  Can you tell us a little bit about that experience?

BS: I love Gurf. He and I got along so well, and he was such an encouraging, supportive producer. He let me try whatever I wanted to try, play what I wanted to play – to have a musician I respect as much as him believe in me and my songs and this project was a huge deal to me. And of course, I loved his tasty lead guitar licks. We recorded it at his place, and it was comfortable, easy, relaxed. I don’t know what else to say except that I like him even more now than I did when I met him – and when you spend that many hours with someone, that’s a good sign.

AD: I always wonder if there are specific songs that are closer to the artist’s heart than others.  Is there one on this album or off of a past album that really means a lot?

BS: I think all the songs on this album are pretty close to my heart. They all come from somewhere inside, you know?

“Never the Pretty Girl” means a lot to me because of the way it touches people. You never realize in high school that hundreds of kids feel like I did – like he or she is the only one who’s totally anonymous in this sea of people. You think you’re the only one who feels hidden – and when I wrote that song, people would write me and tell me how much it moved them to hear a song that was exactly how they felt. So that means a lot. When a song really moves other people, that moves me.

“Whisper My Name” is one of those too – I get lots of requests for it. One woman tearfully told me after I sang that song, “Wow, I want that. I want to feel what you were feeling when you wrote that…” and I loved that she connected with it so powerfully. But really, all of them have a strong cord that is attached somewhere deep in me.

AD: You’ve won awards such as Big Top Chautauqua Songwriter of the Year.  What does that feel like?

BS: It feels great! Someone else likes my songs? Awesome. It can be validating…for about a minute or two.

But really in my core, I don’t like song contests or songwriting competitions. It’s a way to open doors, and so I enter occasionally, but I hate the idea of songs and songwriters competing. It doesn’t sit well with me. Thankfully, once you’re in the final round of these competitions, almost everyone is rooting for each other and cheering for each other and wanting one another to win as much as themselves – so it’s good to know that almost all of us feel the same way about contests – necessary evils.

This is not to say I’m not thankful for the prizes I’ve won – they have been a tremendous blessing to me and have opened doors much faster than I might have been able to otherwise. And I’m certainly happy for all the musicians and friends I’ve made from entering and participating. It’s a mixed bag, I guess.

AD: You are a Texas girl.  Do you have a venue that you love to perform at?

BS: Lots of ’em! In Austin, the Cactus Cafe, the Saxon Pub, Threadgill’s, Momo’s, the Whip In. There are a lot of great rooms. In Houston, Anderson Fair, the Mucky Duck…in Dallas, I love Uncle Calvin’s and Open Door Coffeehouse, Jefferson Freedom Cafe in Ft Worth – I really love so many places, it’s hard to narrow it down! I guess my all time favorite is probably the Cactus.

AD: How was the Old Settler’s Music Festival this year?

BS: Old Settler’s was a lot of fun! It was my first time there since it used to be up north. It was a lot of fun to play, and it was a cool, relaxed atmosphere to listen – which I love. No pushing and shoving, no aggressive crowds, just a lot of music lovers and a lot of great music. I was especially happy that I was in the round with two of my good friends, Jenny Reynolds and Ben Mallott. They’re fantastic.

AD: Who out there in the music world inspires you?

AD: When will your new album be out and where can we get it?

BS: Street date: June 9th! It will be at Waterloo Records here in Austin, or on my website, www.bettysoo.com. You can even pre-order it now – with lots of fun incentives at the website.

Woofstock at Waterloo
Next