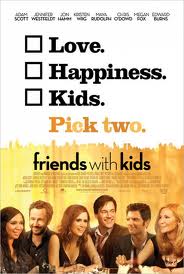 Meet platonic friends Jason (Adam Scott) and Julie (Jennifer Westfeldt). Their best friends are two married couples: Ben and Missy (Kristen Wiig and Jon Hamm) who start out hot and heavy but then allow a chasm of resentment to grow between them, and Leslie and Alex (Maya Rudolph and Chris O’Dowd) who bicker but manage to keep it fairly playful and forgiving. Both of these pairs have kids who create havoc in the home, strain their love lives, and generally wear them out. Inspired by, or more to the point, repelled by the lives of their married friends, Jason and Julie decide to have a baby together, but vow to remain platonic friends so they can separate the act of parenting and the pursuit of romantic love. They think this is the perfect solution to the problems they see around them. Sounds great, right? They get a bundle of joy, and still get to go out like singletons and pursue hot sex. They vow to be “100% committed half the time.” Thus the double-meaning in the title, “Friends with Kids.”

Of course, their married friends see the flaw in this plan right from the get-go. The problem is, so will the audience. It doesn’t take a genius to know that the intimacy of child-rearing will strain and confuse their friendship, and that parenting is going to require more of them than part-time commitment.

Much effort is made to ensure that the march to the foregone conclusion is peppered with “shocking” risqué humor, presumably meant to set it apart from less challenging mainstream rom-coms, but the result is a film that’s more repellent than riotous.

It’s hard to know what to make of star/writer/director Jennifer Westfeldt. On the one hand, donning all those hats at once is something very few women do in Hollywood at the moment, so it seems a “you go, girl” might be in order. On the other hand, the film is so chock-full of puerile, demeaning quips that her character (and by extension, I suppose Westfeldt herself) seems to play as if women are supposed to go along with them in order to be good sports. Nobody wants to be a strident bore, but it’s hard to feel warm and fuzzy about a guy who reminds his gal-pal bff that having a baby will make her pussy so loose that men might not enjoy screwing her.

Are you turned off yet? Because I sure as hell am.

Those are the kinds of things these two obsess over. They never actually talk about parenting, school, discipline, or any other issue that two people might discuss while bringing a new human being into the world. Instead, while preparing for a date a few weeks after giving birth, Julie drops her robe and asks her best-pal/baby-daddy if he thinks her body is ready for her to be naked in front of someone yet. They aren’t exactly deep philosophical types, these two.

With Mike Nichols (Carnal Knowledge, Closer) producing, and the Manhattan backdrop reminding one of Woody Allen, it seems natural to hope and assume that there will be some level of sophistication and insight thrown into these proceedings. Unfortunately, no.

The glib self-absorption of the two leads makes them very difficult to relate to or even like. I found myself wishing this story revolved around one of the other two couples, or both of them. The film works when Kristen Wiig and Maya Rudolph are onscreen. Their characters’ lives seem fuller and more genuine, though they have only a fraction of the film’s screen time to shine. There is a sense that the risks Ms. Westfeldt takes in the writing might have been better served by a more gifted actress in the lead role, someone deft enough to deliver subtext and dimension.

By the time the two leads learn what everybody else already knows, the Apatow-esque crudities (sans any real laughs) have certainly worn out their welcome but they aren’t done yet. In a scene that’s meant to be wrought with emotional catharsis, the final lines of this film are so tone-deaf and off-putting that any points they might’ve won for audacity are lost completely. One is merely grateful to no longer have to spend more time with these two.

Don’t be fooled by the ad campaign. Though this film is fortunate to share much of the same cast as “Bridesmaids,” it’s nothing like that raucous, feel-good hit.

SXSW REVIEW: Bernie, a Heckuva Sweet Guy and a Murderer
Next