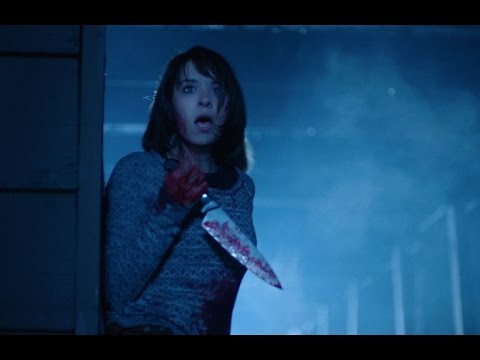 Applecart was a non-committal and poorly executed excuse for a thriller/horror flick and I immediately wished I had gone home to sleep instead of waiting for this blunder of a midnight showing at Fantastic Fest. I can’t think of anything that worked in this film.

A family goes out to a snowy cabin in the woods to seek respite for the father in the family has incurable cancer and the land is supposed to have healing properties. The story is uninteresting enough, when we are initially introduced to some supernatural creatures or witches that have some sort of tie in to these sacred woods.

Story aside, things get really off track when the film goes in an avant-garde direction by showing the audience a fictional true crime series that is airing a re-enactment of what evidently occurred the night the family went out to this house in the woods. It goes back and forth between the fictional series and what actually happened to the family. It wouldn’t be so bad if it wasn’t disjointed and all over the place, but I just couldn’t get past the wooden acting and lackluster premise. I wanted the novel idea to work as much as the filmmaker did, but it just never got there.