Last Saturday night, we headed over to the Moody Theater for another taping of Austin City Limits. This time Ms. Lauryn Hill graced the stage with one of the biggest band’s that I’ve seen on that stage. This review may seem a little late, but I thought it was only fitting given that she showed up to her own taping a good 45 minutes late. I’ve been reading people’s takes on the show and have seen pretty mixed reviews of her taping. She started thing off letting her DJ warm up the crowd. DJ Rampage took us on a musical journey spanning everything from old school R&B, to Bob Marley, to an auditory trip down memory lane and through the evolution of hip-hop music. One of his last songs in the DJ set was Nas’ Lauryn Hill feature, “If I Ruled The World”. After the DJ had sufficiently hyped up the crowd Lauryn Hill graced the stage and approached the microphone while sitting a couch with a table of candles next to her. This was a unique setup compared to other tapings that I’ve been to, but I didn’t really care what kind of setup was up there. Some of the best gigs that I’ve been seen featured just a musician just sitting on a stool with an acoustic guitar. I’ve never been a real critic of showmanship or stage presence. People choose different ways to come across on stage, but it’s the music produced that really matters. An artist with great showmanship only does so much for my enjoyment at a live show. That being said, I think she was going for a bit of intimacy in the first part of her show, but didn’t quite get things to the level that she anticipated. 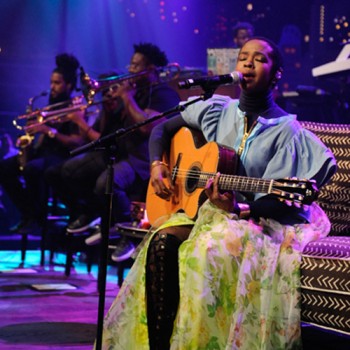 She started off singing with her guitar and the backing of the band. Her voice is still amazingly powerful and stunning in a live setting like the Moody Theater and her backing band was really amazing. Just to name a few standouts, in my opinion, the guitarist was incredible and the drummer was amazing. She was up there directing them the entire time, giving them cues of when to come in and out of her songs. At times it may have looking a bit like micromanagement, but I saw it as Ms. Hill knowing exactly the sound that she wanted and relaying that vision and coaching her band throughout the entire set. These ultimately are her songs; she can conduct if she chooses to do so. A perfectionist? Some might say yes, but either way the sound from that band was pretty incredible. Her performance suffered a little in the beginning from some slight uneasiness and a bit of a disconnect that seemed to be present, but all-in-all she still sounded pretty amazing.

For the second part of the set she was up and moving around. She ditched the guitar and the couch to focused on her vocals and getting the crowd more involved. She was still conducting her band throughout the show, but this part became very energetic. She started to rap and even through in a few Fugee’s songs including “Ready or Not” and “Killing Me Softly”. Her rapping is so heavy hitting and dense and she continually comes with more of it line after line. She’s one of the more vicious rappers that I’ve seen (that’s saying a lot coming off of the Kendrick Lamar taping a week before). The thing that stung even more than all of the bombastic hip-hop beats, the flows, and production that was the message in the lyricism in her music. Hearing these live brings a whole different level of meaning to the words. Her sound was pretty great in my opinion. Beyond, the sitting on a couch, the band conducting throughout, and the lighting problems is a veteran artist trying to portray her personal work in the best conditions possible. I can respect someone who sacrifices a little showmanship (show-woman-ship?) and audience interaction to try and play her songs in the best possible conditions. The problem wasn’t the lighting, the band, or the couch (although the candles could’ve been a problem). The sense of uneasiness in some of the songs along with the abundance of Bob Marley covers was the only part that wasn’t the most enjoyable, in my opinion. She’s a great artist with a fantastic back catalogue of music. She showed the crowd a great time. All in all, it was a great show by an extremely talented individual and extremely talented band. I really enjoyed this show and I’m very grateful to have experienced it in person.