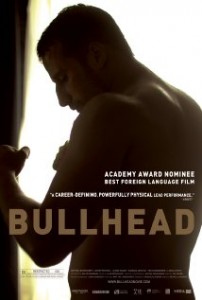 When we first meet Jacky he’s threatening someone with violence. We aren’t sure if he’s a good guy or a bad guy. We only know he’s a guy you don’t want to piss off.

As the story begins, we’re introduced to the strange world of black market hormones for cattle. Unlike in America where we consume copious amounts of hormones, antibiotics, and other chemicals in our meat due to unscrupulous farm-factory processes, in Belgium, such things are illegal. But desperate cattle owners resort to buying hormones on the black market so their cows grow bigger, faster, and are turned around more quickly for a better profit. Like here, the animals are kept in dismal, cramped stalls and do not wander rolling green hills as commercials would have us believe. It’s a dark, grisly business.

Black market hormones are sold much like illegal recreational drugs. Mafia types bring the product in and sell to regular customers.  Thus unfolds a crime story involving a dead undercover police officer who was attempting to thwart local hormone trade, an informant who was raised in the close-knit community of cattle farmers, and the Vanmarsenille family who relies on the hormones to help them compete and maintain a viable business in a crumbling economy.

We soon learn that the informant, Diederik (Jeroen Perceval)  grew up with Jacky (Matthias Schoenaerts) and the two share a sad history.  Jacky was the victim of an unspeakable crime as a child that left him scarred for life: he is without testicles. Diederik witnessed the crime but was not allowed to testify because his father feared repercussions from the perpetrator’s powerful family.

The two boys were no longer allowed to play together, and lost touch until now, when they meet again as adults in a shady business meeting. Diederik is there to gather intel for the cops. Jacky is there to make a deal.  The moment is rich with tragic irony: The boy who couldn’t “tell” now “tells” for a living, but he’s suddenly forced to implicate the very person he would most want to protect.

Jacky has endured the shame of living in a community that knows about his disfigurement. He’s dependent upon testosterone drugs, not only to replace what his body can no longer produce, but also to give him a “high” in which he is strong, powerful… manly.

Matthias Schoenaerts plays Jacky as a hulking mass of shame and rage. He doesn’t carry his bulked-up frame with pride, but rather slumps his shoulders and turns in on himself. He’s so hopped up on hormones  that he’s incapable of controlling his temper or relating well to others: hence “Bullhead.” But the metaphor extends beyond that. Like the bulls trapped in their tiny stalls, he’s unable to interact naturally with his own kind, to be a husband or father.

The subplot involving a woman he fixates on adds an extra layer of sadness to his story. Each time he tries to reach out to her, we feel his isolation and we ache for the innocent little boy who might have, could have, should have grown up so differently.

The criminal investigation, love story, and tension between the boyhood friends all culminates in a heart-stopping climax that you will never forget.

This film is so rich and layered it would make Shakespeare green with envy. Take note of writer/director Michael R. Roskam. This is a major talent.

“Bullhead” is a difficult film. There are moments that are frankly hard to watch and it’s a tragedy in the true sense of the word. But it’s rare that something so bold, original, and thought-provoking comes along.

Kudos to Austin’s own Drafthouse Films for distributing this dark and challenging film. “Bullhead” is an Oscar nominee for Best Foreign Film, deservedly so.

makeshift planters AND YOU
Next