Russ and I were dropped off in front of Stubb’s and I wheeled him to “will call”….we were escorted through the restaurant and were deposited in the VIP section which is a cool balcony 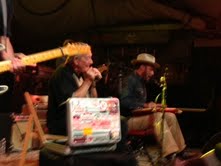 overlooking the stage… Russ was jabbering something about going to the “pit” in front of the stage since he secured a Photo pass for me. I didn’t think there was any hurry but he seemed agitated and seemed upset! I remembered that I got stuck upstairs at The Belmont once the band started and eve 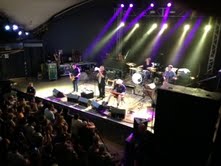 ryone surged forward, so I heeded his advice and went to the “photo pit”. Once I got there I saw it was a shallow metal trench and it was packed with “real ” photographers snapping away like fiends in a frenzy! I was armed with an iPad and my new iPhone5. The burly guard frowned at me but saw my photo pass and let me in. All the “real” photo guys and gals all had at least 3-5 cameras and kind of gave me funny looks. I took a few pics but was in no hurry as it was hot and sweaty. I soon learned why Russ was so adamant about going immediately….all of a sudden the photo people started stampeding out of the pit like a group of doomed rats in my direction chased by an 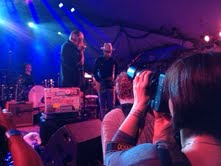 angry hillbilly Security guy who might have been on chystal meth. I get it ! The photo pit is only for 15 minutes or so! No wonder Russ was so insistent! I fought my way through the crowd and joined Russ back up in the VIP section with “the beautiful people”. While I was up there, some tall weird looking dude named Turk Pipkin kept trying to hit me up for money…something about a mail order bride in Africa that he was trying to pay for or something…It was hard to hear him with the band playing so I shot him a dirty look and edged away from him. I was still sweating like a Water Buffalo from the “pit” so I decided to go into the restaurant and cool down in the bar and get a bite to eat. I ordered the buffalo wings “spicy”…I chatted with a nice “frat boy” looking kid from Alabama that was in town for a few days to visit friends and then go to College station to see that horrible Grifter/weasel “Johnny Football” and hopefully get revenge for last year. Nice kid. The 1/2 order of wings arrived and I was delighted to see that they were large, not previously frozen, and very good! He asked where to go after the show and I told him to go to The Continental Gallery to see the Wednesday funk show that starts at 10:30 or so. Oddly enough, later that night I saw him up there dancing with a hot and sleazy local girl…good man! Most “kids” including my adult children ignore my advice as a rule…this kid is changing my perception of “people” from Alabama for the better. I went back out to the VIP balcony but had trouble seeing very well. From what I can tell the large crowd loved the show and went home happy….another night of live music in Austin. Ken Miller 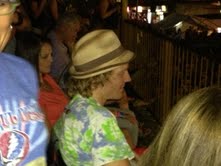 ( RUSS SAYS  THAT THIS SHOW WAS THE  BEST OF THE WEEK…    THE PAIRING IS  BRILLIANT.)

Eliza Gilkyson at the Gallery at Continental Club...
Previous