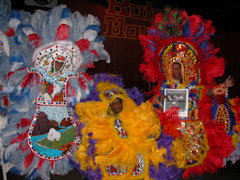 Big Chief Kevin Goodman, Chief Council Alfred Doucette, and Big Chief Iron Horse
Big Chief Kevin Goodman lost everything in Katrina and fled to Austin. Received by the community with open arms, he decided to stay here and we are fortunate enough to experience the rich tradition of the Mardi Gras Indians.

AUSTIN DAZE: What does it mean to be a “Big Chief” and how to do you become one?

BIG CHIEF KEVIN GOODMAN: Being a Big Chief is inherited. I inherited the Indian tradition from my dad who was the original Big Chief and founder of the Flaming Arrows. When I was a kid, Mardi Gras Day was one of the days that we all looked forward to and we would get to put on these beautiful costumes. We would go out and have fun. It’s generations of Flaming Arrows: my dad’s grandkids, my kids, my brother’s and sister’s kids—they become part of the tradition too. The tradition has spread from generation to generation. Flaming Arrows is a family tribe. There are generations of history of Flaming Arrows. My dad is the one that started it and raised me and was my constant Chief and made my costumes and showed me the way.

AD: And the same with the Flag Boys?

BCKG: Same with the Flag Boys. Alfred is my uncle—that’s my dad’s brother.

CHIEF COUNCIL ALFRED DOUCETT: I’m second to oldest. It was 8 boys and 1 girl. I lost some of my brothers.

AD: Were they all Big Chiefs?

CCAD: Kevin’s dad started the gang way back in the 50s—he was inspired by a friend of ours who used a mask and Indian suit. He would come out from the Ninth Ward up to the Seventh Ward where we lived at, where my mom and them would prepare hot cocoa and coffee for Mardi Gras morning. There was a guy named Henry, he was a Wild Man, he would go meet the Big Chief from the neighborhood. There was the Skeleton Man who was a very thin man–he looked anorexic all the time. He had the skeleton look and all he would do was paint his face and put some long drawers on and he would scare the hell out of us. My brother got involved with making Indian costumes and he brought the Flaming Arrows gang from the Seventh Ward and then his kids started growing up and we started masking the kids—all the kids in the neighborhood. Family or not, we got together and made Indian suits for Mardi Gras and we have worked it all the way up until today.

AD: Does it take all year to make the costumes?

CCAD: Mostly. It depends on how many people are sewing. He (Big Chief Kevin Goodman) might have one person sewing him and I might have one other person sewing me but most of the time we are doing our own sewing because you can’t allow other people to go off and sew it because when they come back they are going to sew it their way. When you are a Chief, your vision is your vision. That’s why as a Chief we can invite you to the house to sit down and start sewing but you can’t go off and sew it. Chief takes a year because it’s so intricate.

AD: What’s the difference between Council Chief and Big Chief?

CCAD: Well Council Chief is my position now. I more or less help him get the gang ready. I make sure these guys that say they are coming do what they are supposed to do. It’s a year process from the Chief all the way down to the Flag Boy and he has got to be ready—it will take him less to do but he still has to be ready along with the rest of the guys. That’s my position pretty much.

BCKG: Council Chief is a leader—he makes sure things get done so that I don’t have to get out there for certain things. Going around making sure the tribe members are taken care of, if they need something, because the Big Chief might be busy sewing. Like the pilot and the co-pilot. You’ve got to have the co-pilot.

AD: Do you have to have any special talent to be a Big Chief?

CCAD: You have to have the eye. When you are designing a costume it’s like if someone is designing a piece of jewelry. You are trying to make it as pretty as you can possibly make it. When you start putting that Indian suit together in your mind and then you transfer it to canvas and you got thirty stones that you are going to bead around you have to have nineteen pearls to go around it. So you are going to have to go down the line with nineteen pearls—because that’s what makes the beauty of the thing. You have to keep everything in line. That’s the art of making Indian suits.

AD: I saw an article in the NOLA Gambit Weekly that said the parades have changed in New Orleans because everybody is scattered in different places. How has that affected the parades for Mardi Gras? Are you having to bring people in for the parades or are you going to just use what you have?

CCAD: We have Indians in New Orleans that were uptown that weren’t affected by Katrina. They have been working hard at keeping Mardi Gras going.

AD: Did you bring them into your tribe?

AD: What’s it like being a Big Chief in Austin?

AD: In New Orleans everybody probably knows who you are. What’s it like here?

BCKG: It’s different but it’s still straight and it’s fair. Compared to what I came through with the hurricane. When I left New Orleans I lost everything I had. To me, it felt like life was over then. So to be able to come here and find new life and create a new life–it gave me new spirit.

AD: We really were happy to take you under our South Austin wings and wanted to promote the whole scene.

BC: I picked you to be my favorite people in Austin.

AD: Anything you want to tell Austin?

CCAD: Well I want to tell them about my new
album coming out, it’s called “Rollin’ Wit Da Legends”.

AD: I read about a dream you had three nights in a row that inspired you. Can you tell us a little bit about that story?

CCAD: Meriden Falls. I kept hearing Marie Laveau. I just couldn’t figure out where that was coming from so I went to bed and then it was really, really, really heavy. I just kept hearing it. And I woke up the next day and I told my girl, “You know, I’ve been dreaming about Marie Laveau.” Then the next night it came to me again and then the third night it was all clear; I had all the words in my head to the song. The whole song was in my head. This song is an up tempo song and it’s a message. People in New Orleans aren’t really appreciating it because they are afraid of Marie Laveau. If you listen to my song, there is nothing bad about Marie Laveau. I had some kids research the history for me and find out who this woman was who came into my life and my dreams. I’m a master carpenter, master body fender man, I’ve had a nightclub, I had thoroughbred horses I used to race cars. Singer, I wasn’t. I could’ve sung when I was a younger man and I didn’t. Then, 1992 Marie Laveau is waking me up singing. So here I am today in Austin, performing in your club. I’m fulfilling my dream. I always wanted to do it but my father, who taught me everything I know, we were working one day and a song came on the radio and I sang it and sang it out of key. He said, “Didn’t I teach you how to whistle?” I say, “Yeah.” He says, “Well then whistle because you’re messing that man’s song up.” That kind of put a block on it until 1992 then I started singing and I’ve been singing ever since.

AD: That’s great. Thank you so much. We are so blessed to have you with us **

Mitchell Lichtenstein - Writer/Director of Teeth
Next