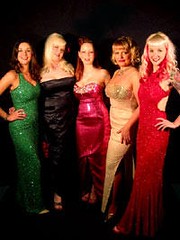 AD: WHAT IS THE DIFFERENCE BETWEEN A BURLESUE SHOW AND A STRIP SHOW?

Well, burlesque can be a strip show, but not in the sense that we typically think of today. Burlesque had a very long history from the 1920s through the 1960s. It was originally an outgrowth of vaudeville. Traditionally, it was just a variety show featuring music, comedy, chorus girl dance acts, and often, strip-tease. By the 1950s and 1960s, it became more about the strip-tease performers than anything else, but the emphasis was still on the theatrical and the glamour. Venues were still typically theaters. The audience was predominantly male, but women went too. The ladies on stage took at off, shook their hips and teased, but in a highly choreographed, artful way. A lot of work was put into costuming as well. It was titillation, but it was also very much a show.
When we think of stripper today, we think of gentlemen’s clubs and lap dancing. The art and the showmanship have virtually disappeared-there is often contact between the audience and the strippers during the “dance”. That would have never happened in the old days.

AD: HOW DID YOU GET INVOLVED WITH BURLESQUE?

I used to live in Boston, and there was an old (circa 1890s) theater downtown in the theater district called the Gaiety. It had been closed since the 1960s, but on the back wall around the corner was big, handpainted lettering on the brick that said “Burlesque, Three Shows a Day, 10 cents”. I’m a historian in real life, so I did my research and found out all I could about it. I was completely taken with the idea of burlesque-it was glamorous, and wholesome and naughty all at the same time. It seemed like something our contemporary culture lacked. Later on, I discovered that there was already a burlesque revival taking place. The first Teaseorama burlesque convention was in 2001. I wanted to get involved, but I had no idea how to go about it, as there really wasn’t much burlesque in Boston to speak of.
When I moved to Austin in 2002, I went to see Red Light Burlesque perform at the Continental Club. After the show I talked to the girls and said I was interested in doing what they do, and a month or so later they asked me to join them. I was with them for about a year, and since then have gone off to do solo work with my partner, the lovely and talented Cardinal Cyn.

AD: HOW IS THE BURLESQUE SCENE IN AUSTIN? THERE ARE SO MANY DIFFERENT GROUPS OF BURLESQUE PERFORMERS IN TOWN THE COMPETITION MUST BE HEAVY

I wish there was more! In all honesty, there’s not really that much burlesque here, and it’s difficult to get shows. I think clubs don’t really know how to fit it in to their usual line-ups. I have been looking high and low for more performers to collaborate with, but for some reason I haven’t had much luck finding other gals who want to wear sparkly outfits and take them off in front of a crowd. Red Light Burlesque and Kitty Kitty Bang Bang are really the only two organized troupes in town. It’s good because everyone does something a little different-Kitty Kitty do more choreographed group dances and comedy and Red Light does bluesy bump and grind. I do a lot of things, but lately I’ve been focusing very traditional, 30s-40s style routines using jazz-Duke Ellington especially. Cardinal Cyn does everything you can imagine, from fan dances to a beatnik-inspired act. Everyone does their own thing, so there’s not really competition per say.

AD: TELL; ME ABOUT BIG EASY BURLESQUE? WHO IS INVOLVED? WHAT CAN WE EXPECT TO SEE WHO IS IT FOR AND WHERE AND WHEN?

After the hurricane hit, I was very upset and I wanted to do something to help. I’ve never organized a show like this before, so it’s been a real learning experience. There will be some terrific acts-the Red Light Burlesque girls have been very helpful. Cardinal Cyn and Mimi Turpentine are also performing. I will have a few special surprise guests as well. If you are a burlesque performer (or want to be) and would like to get involved, please don’t hesitate to drop me an email at missbonbonvivant@yahoo.com!

The Limelights are playing, along with the White Ghost Shivers. I’m currently working on getting an incredible 40s style R&B band from San Antonio, though I can’t tell you who they are until they’ve confirmed. It’s going to have the feel of a real burlesque nightclub circa 1945.

Most of the proceeds from the event will be donated to Habitat for Humanity, because I think that new homes are the most important thing that we can give to hurricane victims who have lost everything. Money will also be given to the Louisiana SPCA to help out the displaced puppies and kitties. It’s on Thursday, November 3rd at Ruta Maya on South Congress Avenue. The show begins at 9:00, so everyone can mosey on up after the First Thursday festivities.

If you’ve never seen burlesque before, this will be a good introduction and for a terrific cause. Great music and gorgeous ladies getting naked for charity! Who could ask for more? *