Big Guitars from Texas to Reunite for Evan Johns Benefit

Most of the original cast from Jungle Records’ 1985 release, Trash Twang and Thunder  Big Guitars from Texas, will reunite at Antone’s on Thursday, February 14th.   Happy Valentine’s Day guitar lovers!

The reunion is a benefit for Evan Johns who has ongoing health expenses stemming from a fall in 2009. He is in need of a hernia operation and hip replacement.

Cover is $10 with additional donations accepted. An autographed guitar, signed by the Big Guitars and many other notable Austin musicians, will be raffled at the show. A Guy Juke original Reunion poster will be offered for sale as well. Doors will open at 7:30 pm with Frankie Camaro taking the stage at 8:30 pm. The Big Guitars will follow doing two sets with some surprises. Limited seating at tables available on a first come first served basis.

The idea nearly thirty years ago was to assemble four local guitar slingers and a rhythm section to show off the grit and power of the Texas bar scene.  Good idea.  The Frankie Camaro penned tune, “Guitar Army”, received a Grammy nomination for Best Rock Instrumental Performance.  And, the musicians definitely left a lasting imprint on Austin music: Denny Freeman, Evan Johns, Don Leady, and Frankie Camaro on guitars; Mike Buck on drums; and, the late Keith Ferguson on bass.

Come hang with us Thursday–it’s a sweetheart of a gig. 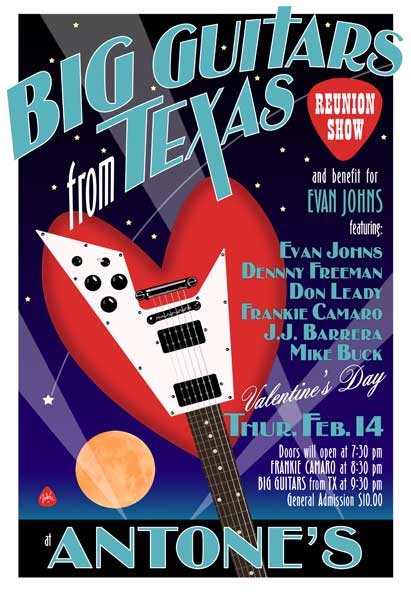 ARNOLD SCHWARZENEGGER AND JOHNNY KNOXVILLE – on “THE LAST STAND”
Previous