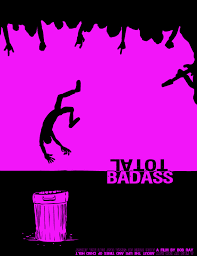 Filmmaker Bob Ray shock bombs the screen with another tale of the Austin underground in his latest doc Total Badass. Ray will be in attendance at this week’s Alamo Ritz screening, along with Chad Holt, the star and subject of Total Badass. Holt is a modern day Texas punk rock version of a Kerouac character; speeding through life on whatever fuels him in a non-stop flurry of writing, drug dealing, singing, stage diving, love making, and guinea pig raising. Spend time with Chad and you’ll witness anything from admiration of wig shop models to philosophical thoughts on the distinct cultural aspects of grease.  A hilarious yet complex character, Chad does really stupid things, yet is smart enough to know exactly how much he can get away with. Arrests and probation can’t slow Holt down, as he marches on proudly giving the finger to society. Total Badass takes a hard look at the casualties of partying and soldiering on despite them. Mired in a lifestyle most are too scared to live, Chad survives using his weapons of choice: utterly frank writing, loud music, and a high drug tolerance. A tolerance so high the cartilage between my nostrils disintegrated just from watching the film. Is Chad living the dream? Or is he just wasting his talents on inspired idiocy? This battle of the two Chads is reflected in the poster for Total Badass. Look at the poster one way and see Chad stage diving with adoring fans. Flip viewpoints and Chad is jumping in a trashcan, throwing his life away. New parenting responsibilities puts Chad at the crossroads between his old life and the future. What made life fun in his younger days isn’t working so well for Chad the Father. He knows he needs to change, but can he pull it off? Check out a screening of Total Badass and find out.

Total Badass screens at the Alamo Ritz this Weds May 26th at 9:30pm. A few of Bob Ray’s hilarious animated shorts precede the film, and there will be a post-screening Q&A with Bob Ray and Chad Holt.  Additional screenings as added can be found here: http://www.crashcamfilms.com/totalbadass/index.htm

Band of Heathens
Next