AUSTIN DAZE: How does directing this film compare to acting?

BOBCAT GOLDTHWAIT: I really like directing a lot more because I don’t like being told what to do and I don’t like the hair and make – up – well I don’t mind make – up but I would prefer my own.

I made another movie years ago, an alcoholic clown movie called, “Shakes the Clown,” but I kind of feel like this is my first real movie where I was actually trying to tell a more linear story and actually have the audience hopefully invest in the characters. So this is kind of my first grown up movie.

AD: What was dealing with the MPAA (Motion Picture Association of America) like? 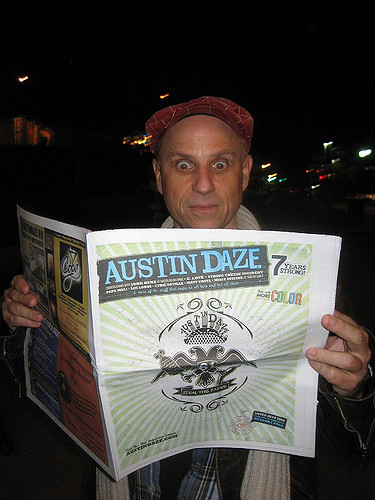 BG: That was really nerve wracking because the movie was originally developed at Technicolor and they were very nice and they worked for free. Then when it came time to develop it, Disney told them after “Inside Deep Throat” if they develop any other films that they don’t find family oriented they are going to pull all of their business. So Technicolor, which was really nice, unfortunately had to drop us and then the guys from Deluxe ended up doing it. So when that happened I thought, “Oh no, we might get an NC – 17.” I was really relieved when we got an R. It is weird because it really is a very heartwarming dog blow job movie.

AD: Where did you get the idea for this film?

BG: Two ideas hit me at the same time: the idea where the end was going to be that a person learns that it is kinder to actually lie–I thought that was kind of a corrupt idea–and then the idea of someone having blown a dog; the idea of getting the audience to stay with her; to still root for her after that–that was kind of what interested me and excited me, because it was more of a challenge. I’m really happy when it works for people. It really exceeded my expectations.

I wasn’t lying when I said I never thought I would see it in theaters, so just the fact that it’s been in all these festivals is great.

AD: What advice do you have for someone that is starting out in the business?

BG: I wouldn’t know how to get a job as an actor. I only got into movies because people had seen my stand up comedy. I learned a lot because in the past I would have to go pitch a movie and then maybe if I was lucky get to write a script, but all of these things never got made. And then other times I would go write scripts thinking well, I could sell this is as a commercial idea. This was the first script where I just wrote it. Even when I finished the script I was happy – that’s never happened before. I wrote the script that I wanted.

I really think the truth of this movie is that I hope it inspires other people to just go out and do it. We really shot this and made it the same way you would put on a play in your neighborhood. The fact that it’s gone as far as it did, I hope it does inspire other people. People say, “Oh well, you are in show business and you know people.” I didn’t really use any of those connections–it was my friends. As long as you have patient friends you can make a movie.

BG: I really hope I can keep making small movies like this. If that doesn’t happen, I could go back to working for comedians. I used to direct the Jimmy Kimmel show–I just left about 18 months ago–and I used to work on the Dave Chappelle show. So to go back to work for that community, that’s a lot of fun too. Knock on wood, it’s kind of a win-win thing. I really like working for comics. As a comedian you always have so many people not listening to you, so when I work for a comedian it’s really fun. I just try to help facilitate their ideas. And then hopefully, my side projects will continue.

AD: What kind of release will this film have?

BG: This weekend it was in LA and New York and some people in New York went to see it but it didn’t do very well in LA, and I have a feeling the company is going to dump it now. The one thing I said is that they really have to let it play Austin.

AD: Is there anything else you want to tell Austin?

BG: I hope it plays here and I hope people come out and support it. Austin is one of the only towns that supported “Shakes the Clown,” and I really have a feeling that they would support this. I hope they don’t dump it. I would want them to at least play it here.