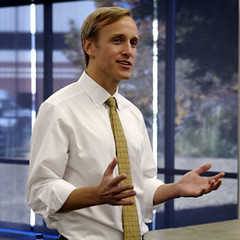 Austin’s mayoral elections are heating up and the Daze sat down with candidate Brewster McCracken to get to know more about his plans for Austin. Get out and vote Saturday, May 9th.

BREWSTER MCCRACKEN:…a father of a 5-year-old boy who loves music, Alexander and the Terrible, Horrible, No Good Very Bad Day, and playing Chutes and Ladders with his dad…

…a husband who feels incredibly blessed by his wife’s love…

AD: For the people that don’t know, you’ve been a big supporter of the film and mixed media community. Can you tell us a little bit about your experience and role in helping those sectors?

BM: When Austin Studios’ development was sidetracked due to the federal government re-directing funds after Hurricane Katrina, I brought together Austin film leaders to craft a studio upgrade proposal. I persuaded my colleagues to include the upgrades in the 2006 bond election, and then I succeeded in accelerating the bond funding.

Robert Walker wrote this great testimonial [link: http://www.brewstermccracken.com/2009/02/04/robert-walker/] about my work with the film and digital media community.

AD: You are also a big supporter of musicians and are concerned about their leaving the city. One of the things that has been happening recently are the increased noise ordinances and increased decibel restrictions. What are your feelings on this?

AD: You want to “make Austin a national leader in the creative economy sectors of film, digital media and music.” How?

BM: Just this week, an economic study was released [link: http://www.brewstermccracken.com/2009/05/01/study-emphasizes-importance-of-creative-sector-to-texas-economy/] showing that Texas’ creative sector is growing faster and paying higher wages than jobs in other arenas and that leading in the creative economy will be important to our state’s future.

I have worked with music, film, video game, digital media and creative arts leaders on strategies to protect jobs and create new opportunities for our creative community. In one of my Crow’s Nest blog posts, “The Creative Economy,” [link: http://www.brewstermccracken.com/2009/02/04/the-creative-economy/] I describe why the creative economy matters to Austin and how we can expand opportunities. And in my most recent Crow’s Nest post, “How to grow Austin’s economy during this economic downturn,” [link:http://www.brewstermccracken.com/2009/05/06/how-to-grow-austin’s-economy-during-this-economic-downturn/ ]I identify the specific steps specific steps that I will pursue to protect jobs and create new clean energy, biotech and creative economy jobs.

AD: In addition to film and digital media you are very passionate about clean energy, biotech, and healthcare. Can you tell us a little bit about their significance to you and Austin as a community? And their role in our economic future?

BM: For a generation, the semiconductor industry has been the foundation of our economy. And now, these jobs are moving overseas.

How Austin responds to this challenge is the central issue in this mayoral election.

The focus of my campaign’s economic strategy – and the core challenging facing Austin’s economy – is protecting jobs and pursuing opportunities in the emerging job sectors of the 21st Century Economy: clean energy, biotech and creative media.

Just this week, the New York Times reported [link: http://greeninc.blogs.nytimes.com/2009/05/04/can-clean-energy-revive-manufacturing/] that Oregon is successfully repurposing semiconductor fabs for solar manufacturing, and that this approach is creating new opportunities for people who have worked in the semiconductor industry. This story demonstrates the value of moving now into these new economic sectors.

Attempting simply to ride out the current storm will not address the fundamental challenge to our economic future. In fact, a hunker down approach would cost us valuable time while other regions work to establish leadership in the emerging job sectors of the 21st Century Economy.

How we respond to this global economic challenge will determine our region’s economic future.

AD: Is the city prepared to become a national leader in all of these?

BM: Yes, but only if we choose to. This will not happen for us by accident or through luck.

AD: How can the Austin Model be applied to our current economic situation?

BM: Austin faces real economic challenges from the erosion of our economy’s foundation in the semiconductor industry. And as I point out in my video post on The Austin Model [link: http://www.youtube.com/watch?v=c3fUkvuvFHg&feature=channel_page], the risk of inaction is that Austin could face decline and loss of opportunity. That video is now the most watched YouTube video in Austin election history.

Decline isn’t inevitable. We can control our future. I have written and spoken a lot about The Austin Model [link: http://www.brewstermccracken.com/about/austinmodel/] because this is the proven approach for how a city can become a leader in emerging economic sectors.

In my post, “The Seven Steps to Securing Austin’s Economic Future,” [link: http://www.brewstermccracken.com/about/seven-steps-to-securing-austin-economic-future/] I have laid out the steps that Austin can use to lead in clean energy, biotech and the creative economy – just as we did in the 1980’s when Dr. George Kozmetsky, Pike Powers, Dr. Ben Streetman and other visionary leaders reinvented Austin’s economy in a 5-year period into a global leader in semiconductors and information technology.

We can do it again. After all, we’ve done it before. And we invented the model.

AD: Let’s talk about fear. People are feeling pretty anxious these days. What can you tell Austinites about their future? What can we expect? What’s realistic? Where does Austin stand in comparison to the rest of the country?

AD: Day to day hot topic we hear a lot about: “Traffic is getting worse and worse in this city.” Thoughts on that and plans for public transportation?

BM: Austin’s vision should be to create a world class transportation system. That means great highways, local roads, rail systems, bicycle facilities and bus networks. The challenge is funding these – particularly with the global financial crisis that erupted last fall. But road and rail systems require a lot of engineering work in advance, so now is a good time to do the engineering and planning so that we can pursue federal funding for these improvements.

BM: I learned to listen more and talk less.

BM: It’s a job where you can really make a difference in the community where you live. And the work is very meaningful.

Regrets at the Second Chance Prom
Next