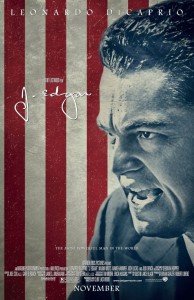 “J. Edgar” is a glossy bio-pic of the infamous founder of the F.B.I., directed by Clint Eastwood with his familiar no-frills style that allows the subject matter and the performances to do most of the shining.

The film begins quite slowly, unless you’re particularly interested in watching a very uptight young man work his way up in government. It doesn’t really have an emotional hook until the moment that Hoover (Leo DiCaprio) meets Clyde Tolson (Armie Hammer), which felt to be 30-40 minutes in. Finally, there is some emotional conflict that one can latch onto: It’s love at first sight, which would be complicated enough in those times, but it’s particularly untenable for Hoover. He is, after all, the face of law enforcement, a terrible prude, and an utterly judgmental jerk. Also, a homosexual, drug-addicted, cross-dresser. Go figure.

In fact, it is here that the central theme of the film begins to take hold: is it simple irony that a man with so many secrets spent his life digging into the personal lives of others? Is it irony that he chose to lord their secrets over them in the form of threats and blackmail (something that surely would have struck fear into his own heart had the tables been turned)? Or is there a more direct cause-and-effect between his shame and repression and this mode of gaining power?

It’s hard to feel sympathy for such a fellow, and yet Eastwood and screenwriter Dustin Lance Black find a way to make us feel, if nothing else, pity for this “fussy little man” (as Lindbergh called him) who desperately needed respect and admiration – so much so that he concocted stories out of whole cloth to put himself in a heroic light.

Judi Dench plays Hoover’s Mom with the kind of quiet control that gives one a chill, and provides more than a bit of sympathy for Hoover’s dilemma. She also loved her son (in her way) and he lived with her until she passed away at a very old age. By then, a warm and lifelong companionship had formed with Mr. Tolson. Hoover never married (not even for appearances sake) and made arrangements so that Tolson could always travel with him. In the end, Tolson was the sole beneficiary of his estate.

Armie Hammer’s performance should solidify him as a fine actor (after the strong impression he made as the Winklevoss twins in “The Social Network”), and Naomi Watts is solid as Hoover’s loyal secretary and the keeper of his (and others’) secrets.

What DiCaprio achieves here is quite impressive: he portrays Hoover from his idealistic youth to embittered old age with equal veracity.  He’s almost guaranteed an Oscar nom, and he deserves it.

The film, however, has its flaws. The beginning is slow, some of Hoover’s political machinations feel glossed over, there is some dodgy old-age makeup here and there, and the sheer volume of people whose private lives he invaded is barely even touched upon. But ultimately, the most frustrating thing about “J. Edgar” is that it asks us to feel sorry for a man who essentially shat upon the Constitution on a daily basis.

I suppose it’s inevitable that a Hollywood bio-pic about a major American historical figure should seek to depict him with some sympathy, and I will confess to being moved by nearly all of his scenes with Tolson. But it is a shame that those who do not know his true story will come away with only an inkling of his criminal deeds – committed while hiding behind a badge and a bureau that enabled his sickness to fester and grow.

True, a film can only show so much in its time constraints, but Hoover did more than just go after political adversaries. He had files on Marilyn Monroe, John Lennon, Elvis Presley… the list goes on and on. And why? Because he personally felt threatened by them in some way? Perhaps their sexual frankness or disturbing hair styles kept him up at night. Poor guy. But then he refused to go after the Mafia. Speculation abounds that they had the goods on him so he backed off. But it isn’t hard to see how completely arbitrary his approach to law enforcement was. Unfortunately, the film doesn’t touch upon that. It just hits the high notes — Roosevelt, Kennedy, Dr. King.

J. Edgar Hoover did some very bad things. Wearing dresses and falling in love with a man do not qualify in this category. Ruining lives, forcing people to live in fear that their deepest secrets would be revealed, disregarding simple decency and common-sense notions about privacy, and violating any and every law he wished – those things are the bigger picture. He was a sick and sad little man, who hurt a lot of people and corrupted the very institution he founded.

And yet, there’s something so basically human about love and loyalty that lasts a lifetime, the fear of not living up to your parent’s dreams, and the realization that you’ve become everything you hate.

3.5 of 5 stars, for Leo’s performance and the Cliffs’ notes history lesson.

A Universe Within
Previous

Dr. John at One World Theater
Next