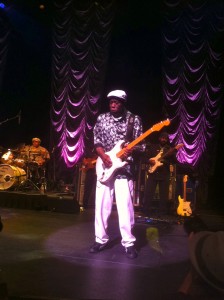 DITORS NOTE: THIS IS BY OUR NEW MUSIC REVIEWER M.C. Parsons

Opening up the show for Buddy Guy Saturday night is the Michael Williams Band, backed by a local horn section that includes Mark Smith and Ephraim Owens. Michael starts off the show with “Fire Red,” a tune reminiscent of Voodoo Child, followed by a stealthy blues rocker and some Latin influenced rock. The horns are dismissed from the stage as Michael puts the Stratocaster in his lap, and switches to a slide number reminiscent of Robert Randolph’s sound and Jeff Healy’s style. The next number is a more Mississippi style of slide playing. Williams is a very strong player and handles many blues styles well, demonstrating multiple influences from Muddy Waters to Jimi Hendrix.  Son of the late Junior Medlow Williams, Michael is filling some big blues shoes as he develops a style of his own.

When Buddy takes the stage, wearing white pants and matching beret, he cuts quite the figure.  Buddy’s piano player pounds his Yamaha like Dr. John and the drummer sounds as large as Buddy Miles. It is all about the blues, as Buddy’s band kicks it with a medley of “Hoochie Coochie Man”, ‘Mannish Boy,’ and “She’s 19 years old,” invoking shades of Muddy Waters and John Lee Hooker.  The influence of Lighting Hopkins and Albert King are also soon to join the set.

Buddy is 74 years young and yeah, hungry for more.  Shut the #^@% up!  It is time to go to school as Buddy demonstrates how long before the British guys even started playing blues, BB King did it this way and Albert King did it that way. Buddy lets you know that he has earned the right to play the blues. That he never had running water until he was 17 years old.  Buddy engages the crowd and responds to the enthusiasm by alternating the sound from loud to quiet, tempo from fast to slow, all while talking about how the radio stations have stopped playing the blues and all you have to do is stop listening to those stations.  Buddy mentions his days in Austin, and how he and Junior Wells would come down from Chicago to visit Clifford Antone. Then, Guy goes right into tearing up a blues number that would make Stevie Ray proud, his guitar up so loud that he can play with his left hand only.

Always the showman, Guy continues to ham it up, playing his Strat behind his back, picking it with his teeth, and setting it down on a speaker cabinet, whipping his hands across the axe, and using a serviette as a guitar pick. The audience is mesmerized and one security guy follows Guy around helplessly as Buddy strolls into the audience.  Buddy’ vocals often reach for the falsetto and the white Stratocaster wails ‘Wah-Wah,’ reprising a monster set with “Boom-Boom-Boom,” “Voodoo Child,” and two Cream covers “Strange Brew” and “Sunshine of your Love.” At the end, Buddy generously brings out some young local kids to join him for a jam and everyone goes home filled up on some smoking hot blues barbeque. Good and juicy like a fatty pork rib.

Only Flashes of Something Special
Previous

original LINE-UP OF BELA FLECK & THE FLECKTONES AT PARAMOUNT
Next