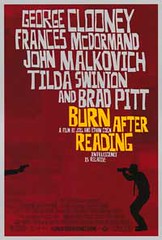 “What the ****?” Three words that are repeated throughout the Coen Brother’s latest installation of weirdness by characters forced to inhabit it. And, depending on just what kind of Coen brothers fan you are, you might choose those three words to describe the film itself. Camp 1: You believe Raising Arizona and Big Lebowski are the cinematic equivalent of Jesus and God (respectively) which goes to follow that every other film going forward would be made in God’s likeness but could never be God themselves. You are content to relish in the joy of just having another Coen brother’s film to view. Camp 2: Jesus is supposed to rise again, so, where is he? And incidentally, you are also still waiting for the Messiah and cannot help but express disappointment when yet another impostor shows up at the dinner table.

First off, Burn after Reading with its unexpected violence, crass dark humor, stilted stylized pacing, and endless plot twists is loudly and clearly stamped a “Coen brothers film.” Absurdity is piled on top of absurdity. Unfortunately, the piling doesn’t amount to much. In a time when Washington Intelligence and the Administration have done such a bang up job of making a mockery of themselves, it’s hard to appreciate the film’s premise. How can you satirize something that has already, so blatantly managed to make a mockery of its self? Our country continues to implode in slow motion, repetitive, breaking news headlines day after day. “What the fuck?” has become the battle cry across the nation. We ask our television sets in response to yet another preposterous CNN report. “What the fuck?” we ask our President. “What the fuck?” we ask ourselves. Arguably, the film is up against the impossible: today life is more ridiculous than the art that is trying to render it so. Satire, at its best, maintains a duality of dark and light, something the Coen brothers have undoubtedly mastered before. Here, the bottom layer, the thing that gives this genre its weight, doesn’t exist. It has been pulled out from under them. And without a bottom, the Coen brothers are left with what one viewer called a “Silly film.” Real life has proven to be more horrifically comic-tragedy than any plot twist could come up with and forces Burn after Reading into the realm of cute. Having said that, it’s still entertainment; there are still some gem lines; comic performances to revere. So, if you’re in camp 1, enjoy the popcorn. Blame it on the country’s sorry state of affairs. Camp 2, nod your head in agreement with most reviews that hit the media outlets this past weekend and wait for the next one.

Catching up with Your Favorites
Previous