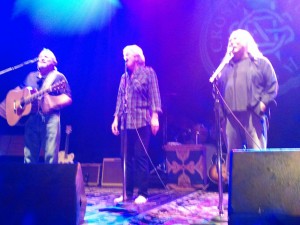 I enjoyed the sold out gig at ACLLIVE AT THE MOODY last night. These guys still have it. They’ve been making people sing along and dance for a long time. Last night was no different. They played through their endless catalog of hits for two  sets. There  was a stellar  backup band behind the  three men. I had an awesome spot  by the soundboard at stage right. Very close to Mr. Stills, the guitar master. Of   the three at front, he seemed most into it, right away, tearing off guitar solos at every opportunity. He had everyone on the floor standing and dancing for “SOUTHERN CROSS.” He made me think of Neil a few times.  They look  alike now in that grungy, old school rocker way, or at least I  thought so. I  kinda thought that I’d miss the Y on stage. I did not miss a thing. No  distractions or additions needed. I was  into it right away. From the first few notes of “CARRY ON” to   the encore of “SUITE JUDY BLUE EYES,” I  was cemented in my spot with a   goofy grin plastered to my face. I  have been a fan since highschool. Back when I    was  younger(  like 12), I  came across a cool  vinyl  that belonged to my  stepmom. It was   “DEJA VU.”  The cover of the album stuck with me.  When I finally played the tracks many years later, I   dug the sounds and was a fan. I wasn’t into cool  (lasting) music yet,   when I first found the album. I   had to do the  eightees thing.  Funny thing is,  that most of the music I listened to in that decade is not really important to me now. Even better, is that “DEJA VU” is playing, while I type this. 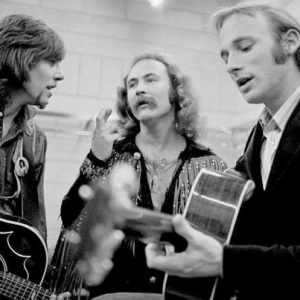 CSN HAS OWNED ROOMS AND LARGE CROWDS AT PERFORMANCES FOR A LONG TIME. Woodstock was 43 years ago. These guys keep making the good times happen. I feel fortunate to have been at this gig.

WATCH THE MAGIC HAPPEN: HARDPROOF 10-12 EVERY TUES IN AUGUST AT CONTINENTAL CLUB
Previous