We give you harp playing legend, Charlie Musselwhite. 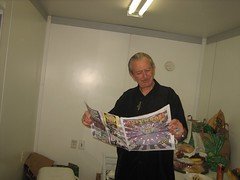 AUSTIN DAZE: I was asking some Austin musicians if they had any questions and they asked: How do you get that sound? What key do you play that in?

CHARLIE MUSSELWHITE: I’m always happy to answer them whenever I can.

AD: Were you self-taught?

CM: Pretty much. The thing about the harmonica is that it is the only instrument that you cannot see what is going on. You have to create a mental image and everybody creates their own mental image of it and it’s not something you can show anybody. I forget who said this but somebody said, “Talking about how to play harmonica is like whistling about chickens.” You can make these sounds but you can’t really describe a lot of it.

AD: Well Dale Spaulding is one of our local heroes, we love him a lot, and he travels a lot. Have you played with him before?

AD: How young were you when you first realized you wanted to play the harp?

CM: I’m still working on that. 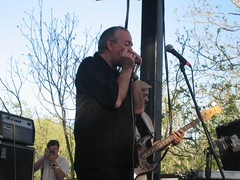 AD: Did you pick up any other instruments early on?

CM: Well when I was just a little kid you would get a harmonica as a toy. I don’t know if it was that way every where but where I lived everybody would get a little harmonica at Christmas. And they were cheap in those days. As a little kid I would go out into the woods and always make up little kid’s tunes.

AD: How old were you then?

CM: 3 or 4. Then later when I was about 13, I loved listening to the blues and I thought, so I just started teaching myself blues back out in the woods with the harmonica. Then my dad gave me his guitar when I was 13 and then I started writing the blues on guitar. At first I was teaching myself and then I got to know guys around Memphis who were old time blues singers, so I got to know them.

AD: Who was your favorite harp player growing up from the Delta?

CM: My first favorite was John Lee Seymour Williamson and then later Jimmy Reed. I remember hearing Little Walter but he sounded too modern for me.

AD: Clifford Antone was able to bring a lot of those people here to Austin.

CM: Snooky Pryor—we called him Snooks. I met him in Chicago. That was later. In Memphis there were harp players that hardly anyone has ever heard of. There was a guy named Johnny Moment—great name—I learned from him. Had a friend named Clydele Smith, I learned from him. From records,I learned from the first Sonny Boy record. I had 78s of both Sonny Boys but I didn’t know they were two different guys. I thought it was odd that they sounded different but I couldn’t imagine that two harmonica players would have the same exact name.

AD: Is there a particular song of yours that has the most meaning to you?

CM: The one I’m mostly known for is “Cristo Redentor”. It’s just one of those tunes that is just timeless. I kind of quit playing it but people keep demanding it. It’s always for me, I just don’t want to bore anybody. It’s always in some ways different every time I start playing, it just takes me where it wants to go.

AD: Have you seen much change in New Orleans in the past 2 1/2 years?

CM: I haven’t been down there since Katrina hit but I know a lot of people that live there and everybody is really angry that the government and good Ol’ George didn’t think it was worth doing anything about.

AD: Do you see yourself doing any benefits down there?

CM: I have done benefits and I have sent money to individuals and to organizations. What gets me, is people in other parts of the country that just say, “Oh it’s just their own fault.” What idiots. They have no idea about what they are talking about. Dr. John is a good friend of mine and he’s got plenty to say.

AD: Yes he does. He’s a great advocate.

CM: I recorded two tunes on the last album about Blackwater. I would introduce that tune sometimes and I would mention something about Bush and you would be surprised how many people would be angry at me–pissed off at me. It’s stupid. It’s ignorant and stupid.

AD: Anything you would like to tell any up-and-coming musicians?

CM: A little interesting thing, I’m in a movie coming out this year “Pig Hunt” and you can see the trailer for it if you Google or go to Fangoria.com. I play a guy named Charlie that owns a little country store and I’ve got a few tunes in the movie.

AD: This isn’t the first time you played on a soundtrack for film.

CM: I played with the North Mississippi All Stars on Black Snake Moan and I played some harmonica for the film “Into the Wild.”

CM: I just played me. I was supposed to play a redneck jerk kind of a guy which isn’t really me but I know how that goes–some are even related to me. ***