Being a huge fan of the film, “Tender Mercies”, I entered the theater with a knot of trepidation firmly lodged in my stomach. The theater darkened, then this sweet music filled the room, and the inner nervousness melted right away. 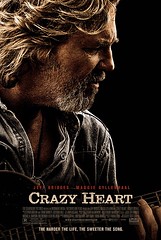 First off, I’m also a huge fan of Jeff Bridges. Beginning with “Last Picture Show” and moving right along through “Starman”, “The Big Lewbowski” and others, this actor has steadily applied himself into roles that he made entirely believable. This role as Bad, a country singer/songwriter who’s fallen prey to alcohol and shit gigs just to stay alive, may very well be his masterpiece.
Must also give kudos to Maggie Gyllenhaal. Her character’s pitch was spot on.
This story is believable and does not come away without leaving some bumps and bruises, and is real. I only had one slight problem with some dialogue in one scene concerning some music business that I found non-believable, but still, this small film gives the movie goer everything they emotionally need to leave the theater having had a real life experience from a world they can never inhabit.
And must bring up the music again as this was the swan song of the late T. S. Bruton. The work he’s done here with the esteemed T-Bone Burnet brings the film an honesty, a hard won battle over life and all its iniquities, trials and tribulations, the travails that we all face day to day. Beautifully done.
And ironic that Robert Duvall (from “Tender Mercies”) himself championed this film as both producer and actor.
All in all, this is a small indie film that’s gotten all the components right. A cool bunch of folks did something quite unpretentious, and you walk away from the theater feeling you’ve just spent two great hours in a world that gives life meaning.

The Lovely Bones
Next