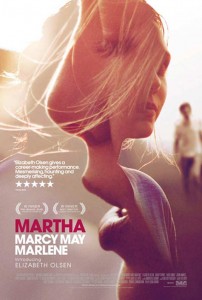 “Martha Marcy May Marlene” is the story of a young girl who has just escaped an abusive cult and is trying to re-assimilate in the home of her sister and brother-in-law. The film’s greatest strength is the seamless way in which Martha’s past creeps in and out of her present. For example, as she jumps into the lake in present time, she emerges from the water in the past, but these transitions are never confusing as director Sean Durkin’s sure hand guides us without confusion and keeps the story firmly rooted in Martha’s point of view.

The film opens as Martha sneaks away from the commune in the wee hours of the morning. She’s trembling, terrified. A desperate call from a pay phone to her sister brings a ride and a respite away from whatever horrors she’s just escaped. Unfortunately, leaving and truly escaping are two different things.

As the two timelines play out with an alternating rhythm, the dark details of Martha’s time at the farm lend insight into her bizarre and inappropriate behaviors in the “real” world. At first there are fairly innocuous gaffes, such as skinny-dipping in the lake (Horrors! The neighbors might see!) and sitting on countertops. But gradually the tenuous grasp Martha has on reality becomes more apparent and disturbing. Her relationship with her sister (Sarah Paulson) and brother-in-law (Hugh Dancy) become increasingly strained, not just because of her odd behavior, but because the only family she’s got left are fairly shallow, self-obsessed yuppies. They want the big money, the prestige apartment in the city, and a new baby. Martha simply does not fit (and probably wouldn’t even if she were not suffering post-traumatic stress.) Ultimately, the sad fact is she’s a lost young woman without a home or a real family. She fits nowhere, which helps us to understand how and why she may have succumbed to the lure of the commune in the first place.

Life at the commune is at first inviting and warm, then increasingly creepy. John Hawkes plays cult leader Patrick with the right blend of charm and sinister reserve. One gets the feeling that while he speaks in soft tones, just one wrong move might cause an explosion. He manipulates “family” members by the giving and withholding of love and approval, and justifies horrific deeds with twisted Manson-esque logic (“Death is the ultimate act of love.”) This isn’t a religious cult, it’s a cult of personality, and the victims are wayward youths in desperate need of unconditional love. Just when it seems they’ve found it, the conditions arise – and they are heavy. The indoctrination is methodical and steady. Patrick knows what he’s doing.

It doesn’t escape notice that the farm is populated with attractive girls and dim-witted boys willing to do Patrick’s bidding. However, one assumes the means with which Patrick brainwashes the boys is a bit different, and we aren’t given much insight there. Another question that came to mind early in the film is just how the idea of coming to the farm is first broached with potential members. How did Martha meet the friend who brought her there? What were her expectations?

As each member settles in, they “find their purpose” among the group and contribute to the hippie commune lifestyle, the women are sexually used at Patrick’s will, and there is a bit of a hierarchy among members who have been there longer. Martha eventually becomes a “handler” for the new girl, and it is then that we see how fully she’s lost all sense of self.

Elizabeth Olsen (Martha) gives a strong performance that will likely do for her what “Winter’s Bone” did for Jennifer Lawrence last year. It is doubtful anyone will confuse Elizabeth with her famous sisters ever again. John Hawkes is brilliant, as always, and deserving of awards attention. Sarah Paulson and Hugh Dancy are fine in roles that aren’t meant to be terribly likeable, but serve the story well. The cinematography is lush, giving personality to both the humble commune in upstate New York, and the upscale lakeside home in Connecticut. Durkin’s pacing is deliberate and does not get in a hurry.

The central issue in “Martha Marcy May Marlene” is two-fold: how reliable are Martha’s memories, and more importantly, how real is her perception of the present? The chilling final sequence will have you pondering those questions as you leave the theater.

Only Flashes of Something Special
Next