Well, there’s a bit in the good news/bad news department here. This is my last column of reviewing CDs, but the good news is that I will still be doing interviews and doing some live show reviews for the Daze.

In the last two years, I have been exposed to so much great music that I would have never heard otherwise, this issue included. I have discovered a lot of great new bands like the Frontier Brothers and the Steps, as well as keeping up on the latest of bands I already knew and loved like Reckless Kelly.

I have also gotten to make a lot of new friends, and meeting all of you lovelies out there who have said hello in person has been priceless. I look forward to continue to see you as we flower the town together.

Bands, you can keep sending your music into us at PO Box 40425, Austin, TX, 78704. Everything gets listened to at the Daze World Headquarters.

May I see all of you beautiful people on down the line….this is by no means Goodbye Darlings…… 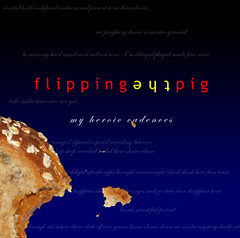 FLIPPING THE PIG – My Heroic Cadences

Is flipping pigs similar to the cow tipping we saw in the movie “Heathers?” Or is it something that you do when flipping the bird just isn’t enough?

Whatever the case, this quirky experimental album was written and recorded in a month (February even!), although it came out better than some albums people spend a year on. Very interesting sounds and unique vocals make this something you want to listen to several times just to discover all that is there.

Melodic and quite original, this CD recalls a bit of They Might Be Giants in the approach. As one of my musician friends likes to say, “Let’s have fun with this one.” A good time indeed.

Daisy’s Favorite Lyric: “Don’t throw the rock in the water, you’re going to hate the ripple”

ANTHONY SMITH’S TRUNK FULLA FUNK – “Life As We Know It”

Karl Denson’s keyboardist’s all-star funk band puts out an album that at times reminded me of – and I never thought I’d ever write this – Stevie Wonder’s Songs in the Key of Life. The vibe, the real life lyrics, the melodies and the organ sounds are all reminiscent of that landmark album.

Once I put it in my CD player, I found that there was a problem. My stereo wouldn’t go loud enough. Seriously. I wanted to turn it up and up. This is a pure R and B record, and if that’s your thing, this could immediately become a favorite new album. It has become that for me, fueled by the smooth, in the groove vocals of Walt Williams. If my CD changer gets stuck and I can only have a handful of albums to listen to, I hope this one is in there. Now that I have found that my stereo needs a volume push, let’s pray that doesn’t happen.

If this CD were released when I was a teenager, I would have excitedly run over to your house with to share it with you. Have I mentioned that I’m knocked out by it? Let me condense this to a two-word review to make it clear. “Hot Shit.”

Daisy’s Favorite Lyric: “Don’t be making assumptions, don’t be thinking you got me all figured out”

MARK AMBROSE – Put the Hammer Down 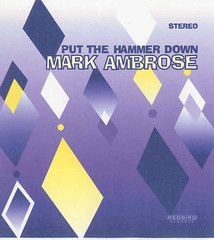 With songs covered by such Austin luminaries as Jane Bond and Toni Price, chances are that you know Mark Ambrose better than you think. If you listen to KGSR, you’ve probably heard his rhythm guitar playing on Gillian Welch singles as well.

This twelve-song collection gives clues to where one of Austin’s best-kept secrets may hide. With too many standout tracks to name in just a couple of paragraphs, Put The Hammer Down is a good reminder of how much fun great songs can be. While many songwriters are known for their use of melody or for their lyrics, Mr. Ambrose excels at both. His tunes and his words can stick in your head and bring a smile to your face hours after listening.

This album was produced by David Rawlings, features his lead guitar playing, as well as Ms. Welch on bass. If you’re looking for a new artist to discover for yourself, this album is a perfect pick. 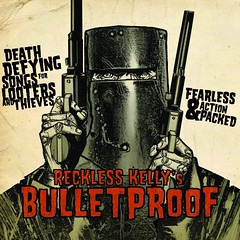 Reckless Kelly’s fifth album features some cool cover art of Australian bandit Ned “Reckless” Kelly. In it, they tackle some difficult topics such as the war in Iraq and victims of Hurricane Katrina, while throwing in the dusty outlaw type tunes that has endeared them to many of us.

The first few listens were a bit more Nashville than Texas to my ears, but after hearing it a few times, the songwriting started to standout through the production. The songs themselves are very well written, and some are becoming some of my personal favorites of theirs. Now when I play it I do hear a bit of an edge as well, it just took a bit for the polish to wear off for me.

Though not quite as reckless as some of their previous work, Bulletproof has plenty of fun under the hood, and might best be listened to cranked up with the windows rolled down as you feel the wind through your hair on Highway 290. Now on Yep-Roc Records, look for the Braun brothers and company to reach more fans than ever with this CD.

Daisy’s Favorite Lyric: “Just like every place you go Austin, Texas has the blues”

RUBY DEE AND THE SNAKEHANDLERS – Miles From Home 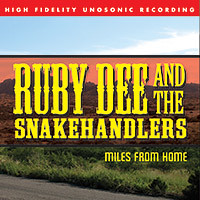 So Love, what is rock n roll to you? I adore my ZZ Top and Metallica as much as the next “For Those About To Rock” t-shirt wearer, but rock n roll in its purist form is often called rockabilly.

This group recalls plenty of the sound to fall into that category, although I wouldn’t completely limit them to it. Ruby Dee Phillippa’s vocals are reminiscent of Wanda Jackson, but the band also mixes in Bakersfield, California and Hank Williams as influences too. The songs have quite a bit of originality to them despite the retro feel, and that set them apart for me.

This very danceable disc had me consider filling the living room with hay and inviting some friends over for a swing dance party on the spot. My roommate Lily was either the voice of reason or party pooper depending on how you look at it, and suggested we go to the Broken Spoke instead. I think she just didn’t want to clean up. At least we still had a good time, though.

Word on the street says this outfit is moving to Austin near the end of the year, leaving Seattle heartbroken and perhaps leaving us the happiest town since Bop City. I personally can’t wait to see this band live.

THE STEPS – The Steps

This debut gives us a glimpse of a promising young group. Remember that band you loved in high school and you were sure they were going to be rock stars? That is the same feeling I get from these boys, and hey, that was the feeling that Van Halen’s classmates had at one time.

Merging together influences such as the Rolling Stones and the Strokes, the band comes off sounding a bit like Jet or the mid-60’s Kinks, but certainly aren’t clones. The rhythm guitars are pounding, the leads melodic, and the songwriting mature despite the fact none of the members are old enough to drink alcohol – legally at least.

This is an exceptional first appearance, and for a young group to play so well together is indeed rare. Certainly producer Frenchie Smith may have had a hand in that but like every major league baseball manager will tell you, the players have to go out and execute. Keep your eyes (and ears!) on The Steps; this is a band that could accomplish quite a bit in the next few years.

Daisy’s Favorite Lyric: “You see these outlaws, they try to rob you, steal your heart and your money too” 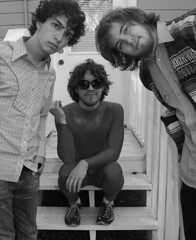 The Frontier Brothers are one of my favorite new bands, and their first full length CD did not disappoint.

Recorded with Stuart Sullivan (Okkervill River, Sublime, the Meat Puppets), Space Punk Starlet! has the characteristics of a group releasing their third or fourth album, as they have already crafted their own recognizable sound and feel. Combining honest to goodness fun with Bowie like musicality, the record goes from sounding big and happy to raw to downright luscious and beautiful. The added texture from the “Intergalactic Orchestra” is done tastefully and just not to say, “Hey man, we put a French horn on our album because we’re that cool.”

Their obvious enthusiasm is prevalent on the album, and the energy of their live shows comes through. I attended a recent show, shortly after their photo session with SPIN magazine, and the floor was shaking from the madness of the dancers. Quite a few people are becoming hip to this Austin trio, and my humble guess is many more will be after this release.

Daisy’s Favorite Lyric “I wish I could solve all the popular problems our day, so that you and I could waste away someplace nice”