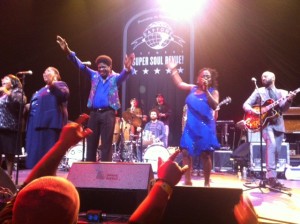 Last night, Russ and I went to the Daptone Records Showcase at the ACL theater.  It was a show that I, myself, went into blindly.  I knew that it was soul music and it was going to be a high energy show, not only with the music being played, but also the performances and dancing on stage by each of the artists.   The first group of women, known as the Como Mamas, came out at about 8 and sang some amazing soul tunes.  During the performance, Sharon Jones came out into the crowd and started singing and dancing with people.  She stayed by me and Russ for a good portion of the performance and clapped and danced with Russ for awhile.  Next, the Menahan Street Band came on and jammed out with some funk music that was pretty mind blowing.  From there, Charles Bradley came out and literally tore his heart out and put in out there on stage.  It was pretty cool to see a guy like that dancing around, swinging mic stands, hitting high notes that I didn’t know could be hit and just really putting on a show out there.   After Charles was done his set, the Sugarman 3 came on and really rang my ears with horns blaring and playing some awesome jazzy/funky jams.  Finally at around 11pm Sharon Jones was brought out the stage by the Dap Kings.  The performance by her was pretty incredible.  It was more of a show of a show, rather than just a concert.  Once the Dap Kings and her got off stage, this hardcore funk/jazz band came on called Budos Band.  It was a rock and roll version of funk that really kind of blew me away.  It was the combination of the noise and the symphonic melodies that was something I’ve never heard together.  At the end of the gig, they all came out on stage and performed a song together, which was pretty awesome.  The entire showcase was one long jam session because they never really changed instruments.  Each band played the same instruments, just different musician playing them in different ways.  All in all, the showcase was pretty amazing and I’m glad that I went.  I’ve realized that when Russ says something is going to blow my mind, it literally does.  I’ve seen some of the best live music ever down here and most of it from bands that I’ve never heard of before. 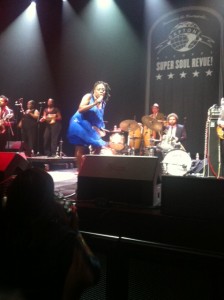 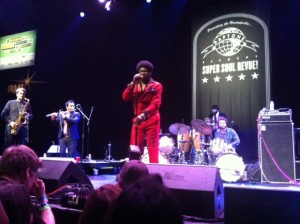 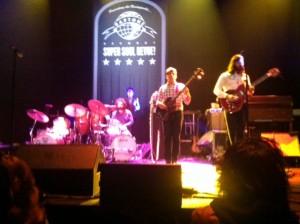 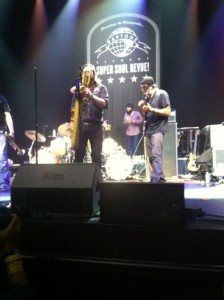