Date night at “State of Play” 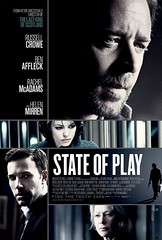 I usually try not to attend movies on Friday night because the theaters are filled with adolescents and ooey-gooey lovers. But, I decided to brave the crowds to see this flick based on my familiarity with the BBC version. “State of Play” can be described as a political/military thriller which has you trying to figure out who the real scumbag is (or is it everyone?).

Russell Crowe is a Washington Post journalist covering a homicide/attempted murder case but he soon realizes it’s tied into another suspicious death that could possibly involve his old college roommate, a Congressman (Ben Affleck) who is participating in a hearing to take down a large military conglomerate. It’s up to Crowe to figure things out for his old chum while simultaneously trying to help his fledgling newspaper get the scoop first and help season newbie Della Frye (Rachel McAdams). Oh, and all that while trying not to get murdered by the very people he’s investigating. Is the plot too difficult for you to figure out on your own? No, not really but the cast keeps you engaged especially (in my opinion) Jason Bateman. This guy can make any small part into something memorable. So, to wrap things up, “State of Play” was good enough to see in the theatre, but maybe just a matinee showing.

Is Anybody There?
Next