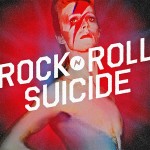 Here is your chance to be transported back in time to 1972 and experience the greatest rock concert ever ever produced!

Come and bear witness to the ground-breaking rock and roll – as local music collective Purple Bee Crew recreates The Rise and Fall of Ziggy Stardust and the Spiders From Mars in all its bombastic, spellbinding glory.

Kicking off the night – The Super Creeps, an all-star band of Bowie aficionados led by Adam Sultan and John ‘El John’ Nelson, will perform a full set of Bowie classics.

The grand finale is Rock and Roll Suicide, a stunning and costumed re-creation of the legendary Rise and Fall of Ziggy Stardust album. Released in 1972, “Ziggy Stardust” was an immediate hit and vaulted David Bowie to a mega-star. Rolling Stone listed the album at #6 on their greatest albums list from the last 50 years and #35 on the Top 500 albums of all-time.

Come early for a Bowie mashup. Put on your ‘glammiest’ clothes and get a lightning bolt face painted. Get your photo taken on the red carpet ‘as’ David Bowie. This concert benefits Aids Services of Austin.

T Bird and the Breaks and Rebirth Brass Band at The Belmont...
Next