Deathgasm will melt your face 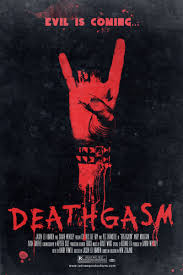 This film was so metal, I might have had a Deathgasm after viewing it. This has probably set the bar for films at SXSW this year. I mean it’s about teenagers forming a metal band that happens to play a piece of music, the “dark hymn” that summons the devil and causes the townspeople to turn into demons. It’s a metal themed movie that didn’t disappoint.

I’ve been describing it as Shaun of the Dead meets The Evil Dead I and/or II. A film born out of New Zealand, the genius behind the film, Jason Lei Howden, came on right before the screening and said if we liked it, we should petition online for a sequel because he needs more work. I hope he has already written a script because I’d watch another ninety minutes of gore and mayhem.

I knew I was in love when the main character, Brodie (Milo Cawthorne) daydreams about being a metal guitar player on top of a mountain shooting lasers out of his eyes to remove the clothes of the girl of his dreams, Medina (Kimberley Crossman).

Filled with plenty of gore and some pretty gnarly deaths, one particular scene involved death by sex toys which was maybe the most brilliant scene ever conceived on film. A film that doesn’t take itself too seriously, but never loses its eye on the prize, Deathgasm is a must see for everyone ever.