Direct from Broadway – A Bronx Tale

Appearing at the Long Center for the Performing Arts, September 3–6, 2008 – Q & A with author/star Chazz Palminteri

Since you don’t come from a show business family, what led you to become an actor and playwright? 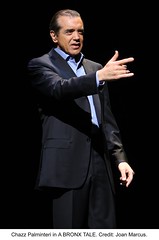 CHAZZ PALMINTERI: My dad sang. Obviously, he didn’t try to pursue a career in that — he had to make a living – as a New York City bus driver. My mom wanted to be an actress but she knew it would be very difficult but she always thought about. They always took me took movies. I loved movies. By the time I was about ten years old I knew wanted to me an actor. I remember seeing “On the Waterfront.” It was mesmerizing — seeing Brando and Rod Steiger’s performances — and Paul Newman in “The Hustler.” There was something inside me that kept telling me, “I can do that. I have natural ability to do that.” And writing? I just thought, “Gee, I can do that, too.”

What was the original motivation to write the play, A BRONX TALE?

CHAZZ: I had done a lot of theater in New York. I went to Los Angeles. There I started getting jobs in TV right away, “Hill Street Blues,” “Matlock,” “Peter Gunn.” Episodic television. I wanted to get into movies but the good roles weren’t there. I was starting to run out of money so I got a job as a doorman. One night, there was this guy yelling outside the club I was working, and I tried to get him to be quiet down. The owner comes out and tells me this guy is Swifty Lazar – a big-time agent – I got fired. So I went home to my dumpy apartment distraught, depressed and wondered “what am I going to do now?” I picked up a card my father gave me that had these words written on them: “The saddest thing in this world is wasted talent.” I looked at what that card and I said to myself, “You know, if they won’t give me a great part. I’ll write one for me. It will be a one-man show so they’ll notice me. So I drove to a drugstore and bought five pads of legal-size paper, came home and asked myself: now what am I going to write about? After thinking about it, I remembered that when I was nine years old I saw a guy kill another guy over a parking space. Now I had a story to tell.

How did you first develop A BRONX TALE? Did you just start writing … or was it more of a process?

CHAZZ: I’d write five or ten minute segments, then I’d try it out in front of an audience on Monday nights at Theatre West in L.A. I’d tape my performances and I’d makes notes, then rewrite and fine tune. Find out where the dull spots are, where it dragged… what needed to be improved, then I’d return the next week with another five or ten minutes. I kept doing that for ten months until I had a play I wanted. Then the play premiered to great reviews and suddenly my life changed. The movie studios started a bidding war. I was offered a quarter of a million dollars, another offered a half-million. The two hottest properties in Hollywood at the time were Rocky and A Bronx Tale. Another studio offered 1 million, but I wouldn’t sell to any studio unless I got to write the screenplay and play the gangster Sonny. Then the play was produced in New York where Robert De Niro saw it and told me I would make a great Sonny and I should write the screenplay. De Niro also agreed to play the Father and to make his film directing debut.

A BRONX TALE has been called a semi-autobiographical play? How much of the story really happened to you, how much was enhanced for dramatic purposes?

Even if you’ve seen the popular movie before, why do you think people should still see the play?

CHAZZ: I think it is important thing see the play. Seeing it on stage is a more visceral experience. It’s me telling my story live to an audience. 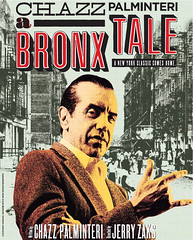 Why do you believe A BRONX TALE is a play for parents to bring their older children to see?

CHAZZ: Because it’s all about how the choices you make when still young will shape your life forever. I’m touring this play because I want other people in other cities to see it. I want parents to bring their children….twelve, thirteen year olds. Kids have got to realize that life is walking a tightrope. The choices you make when you’re young will shape your life forever.

Doing a full-length one-man show must be exhausting. How do you feel after you perform the play?

CHAZZ: After every performance I feel great. It’s a spiritual thing… reaching people, especially kids. The play is celebration of my father’s life…He recently passed away at 89 years old. Doing this play is my way of being close to him. My mother is 89 years old. They were married for 64 years… They had a great relationship… The play is not about good versus evil, it’s about gray versus gray. I just share… truthfully, the mission that God gave me. I am sharing my story and what it means. I’m so proud of this play. I hope people bring their kids for this lesson in life.

In adapting the story, was it hard to make the transition from a stage play to a screenplay?

CHAZZ: No, it was easy to write. That’s because A BRONX TALE it not really a one-man show, it’s a movie on stage. It’s a linear story going straight through….it’s not a typical one-person show… Seeing the play is like watching a movie.

As you perform the play today, in comparison when you first did in 1989, how is it different for you as a performer this time?

CHAZZ: When I first did the play, I was young, single and not yet a parent. So I related more to the son character. Now that I’m older, married and have a son, I now relate more to the father character.