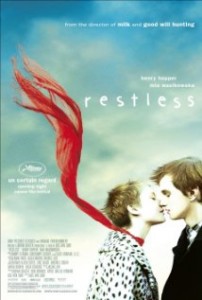 “Restless” is the story of Enoch and Annabelle, whose lives intersect as the boy deals with the grief of losing his parents and the girl prepares to shake off this mortal coil. They crash funerals together and generally make light of death as a means of coping.

Mia Wasikowska, (an actress with perhaps the most friendly, expressive face in the business), plays Annabelle with a spritely joy that juxtaposes nicely with Henry Hopper’s more brooding persona. Indeed, Hopper (son of Dennis) calls to mind River Phoenix, exuding a gentle spirit and a kind of lost soul quality that is hard to resist.

In addition to funeral-crashing, the two share other odd obsessions, such as cultivating a wardrobe from a (very) by-gone era and talking to ghosts. If this all sounds a bit too intentionally precious and off-beat, it probably is. In fact, the film is such a departure for director Gus Van Sant (“My Own Private Idaho”, “Milk”) that it feels more like a Wes Anderson film with its sad, outsider characters and their accompanying indie folk soundtrack (but without the wry insight and signature Anderson visual style.)

Enoch and Annabelle’s budding romance is halting, awkward and sweet. They aren’t in a hurry to throw themselves at one another. The soft-hewed cinematography complements the tenderness of their courtship and the sweet, melancholy tone of the film. But at the same time, the muted look gives the film a dreamlike quality that is somewhat distancing and surreal. The urgent and gritty truth behind Annabelle’s circumstances are whitewashed in other ways as well – she never seems physically incapable or even tired until the plot calls for her to have an emergency.

There is an odd subplot dealing with Hiroshi the Ghost, who seems more like Enoch’s imaginary friend. His purpose in the story is not always clear, except that he provides a sounding board for Enoch, and the fact that Annabelle believes in his existence simply because Enoch does, endears her even further.

As one might expect, the collision of these two characters at their respective crossroads brings them both to a deeper understanding of life, death and what it means to love. Their romance brings Enoch back to life, just as Annabelle is fading away, and it’s this intersection that gives a potentially depressing story a life-affirming conclusion. The film’s wordless final sequence is especially poignant.

The strength of “Restless” lies in the performances, but the weakness lies in the sinking feeling that all the whimsy is manufactured. The recipe seems to be leftover stew from “Harold and Maude”, “Love Story” and “Garden State.”

Perhaps every generation needs a weepy love story. Young people of a certain temperament are likely to take this one to heart. For everyone else, it’s a melancholy confection that may test your tolerance for all things quirky.

Cult of Personality
Next