Eliza Gilkyson at the Gallery at Continental Club… 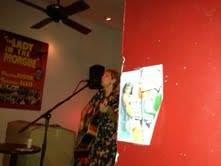 Last night I was downstairs listening to the Warren Hood band play and Eliza Gilkyson trudged by with a giant guitar travel case on her back…I asked “are you playing here tonight?” and she shot back “upstairs at 10:45” Since that was in ten minutes, I started inching towards the door. I made my way upstairs and heard this beautiful voice! It was crowded because there is some sort of “booking” convention in town for music acts so a parade of folk singers were doing short sets. The voice belonged to a young “pretty boy/ Mr. Wonderful” type of guy….handsome, cool hair, well groomed, nice clothes, kinda looks like Leonardo DiCaprio…I hated him instantly! His name is Parker Millsap…after 3 songs I was very impressed. Never heard of him…but really enjoyed his set. Next up the lovely Eliza…she is a veteran who I have seen many times and I was sitting there hoping she would play ” The Beauty Way”…so having a great time and enjoying the show. Things couldn’t be better until she did the most horrific thing that folk singers inflict on the unwary…the dreaded “sing along”…. and what made it worse…it was a back and for “whistle-athon”…I’m not kidding! This was the worse shit ever!! I stared looking for something to hang myself with or at least…poke out my eardrums! Finally even Eliza couldn’t take it any more and started laughing and it thankfully ended. I can’t convey how horrific it was to see an earnest group of aging and sincere hippies “doing there best” whistling. It was worse than the Ice Capades. It goes to show you how fast things can turn on you!..another night of live Austin music.       Ken Miller

T Bird and the Breaks and Rebirth Brass Band at The Belmont...
Previous

Ben Harper and Charlie Musselwhite at Stubb's
Next