Ellen Stader isn’t going to let a little person named Tom Waits keep her down. The co-creator of the Tom Waits Peep Show got put on hold after his “people” informed her he doesn’t want anyone using his name anymore. Perhaps a blessing in disguise, Ellen is off and running with a brand new funk/soul revival project-THE FUNK PEEPSHOW. Here she tells us all about it. 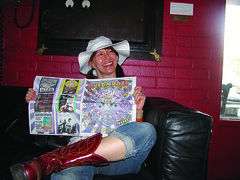 AUSTIN DAZE: What happened with the Tom Waits Peepshow?

ELLEN STADER: It’s just in limbo—we don’t know anything right now. We’ve been working with his publishers all along and sending them their royalty checks at every run and it was all well and good until we did the tour in San Francisco. There was a lot of press about it and I guess he got phone calls and stuff and I’m sure that’s the thing he hates the most—people calling and saying, “Oh my god are you playing? You never play in town.” When we got home we got an email from his Publisher that we had been working with and she said that there have been a lot of groups using his name or his likeness or his music without his permission and he was just going to put a stop to all of it. So we were like, “Ok, yeah but we were always trying to do the right thing.”

AD: It’s strange that they were Ok with it and then all of a sudden not.

ES: Yeah. And they were. I don’t know if it’s because suddenly we were big enough to pay attention to or if it coincided with lots of reports of other shows or what. So we said, “Can you at least see what it is like before you reject it out of hand?” And so we did this filming and it was this huge deal for us and the footage took awhile to edit and we sent it to them and almost immediately got sort of the same standard answer back–I don’t even think they watched it. We’re just trying to decide if we want to push it.

AD: What other ways could you push it?

ES: Opinions sort of differ: our manager thinks there is no legal recourse as long as we pay them for the use of the songs and don’t use his name in the title and don’t use his image anywhere. We think legally there is nothing that they can do. We just have to decide if we want to jump in and do that. Because we have been waiting all this time and trying to be good, we started thinking about other projects and have begun to think that maybe we should just let this one rest.

AD: That shouldn’t be hard with you. There always seems to be new things on the horizon.

AD: What have you been thinking about and working on? 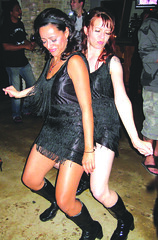 ES: We knew from early on that we wanted to do a show centered around funk and soul because that’s where very much our connection lies. Our long term goal is the funk peep show. We expect that to happen in some form or another near the end of the year. We are trying to do a few installments with different bands just to see what works and what doesn’t. The Staxx night party thing was the first installment. We definitely want to pull our band back together and augment it with some other musicians—we need a funk bassist and stuff like that. So we are working with different groups. We are going to try and do a Prince show at the end of the summer so that’s the next big idea.

AD: Is it a different cast?

ES: The Funk PeepShow dancers are different from those in the Tom Waits show, because our focus is different. And the band lineup will change slightly, too, for the same reasons: Since funk and soul is where our hearts live, we want to work with people who have the funk in their every thought and movement.
AD: Tell readers what they can expect at one of your shows.

ES: The components are: live music, dance and variety show to glue the whole thing together. We used a half-ass narrative structure in the Tom Waits show—it was really half-ass. One of the things that I like best about having a live band is that you can arrange it however you want. Rick’s arrangements are really different and exciting and awesome to dance to. I can say I need 3 more 8s right there and get them.

AD: How do you cast?

ES: It was a long freaking process. The first year that we did it I thought I would have all the talented people I can get into the show, which sounds fabulous until you start to schedule 30 people. It was such a nightmare, not because of any particular person, but just because of the whole process. It was a really good trial by fire that first year. Some people got too drunk to do their shit on stage, other people had problems with that—there was some drama. So the next year we had quite a bit fewer people. We went from 30 people to 22. Then when we went on the road, cast and band included, it was 16 and we had a wrangler. That’s still not a small cast but much smaller.

AD: We understand there was a charity involved.

ES: Some of the money went to KOOP and the Staxx Music Academy in Memphis. We just thought it seemed like the right thing to get them involved and it only took one phone call and immediately we got a response back.

AD: What are a couple of your favorite Staxx albums?

ES: I can give you songs: “Let Me Come on Home” by Otis Redding. Everyone in the cast was singing that song by the end of rehearsals. There is that horn line that is amazing. There is a song that we didn’t get to do by the Sweet Inspirations, The song is called “Dirty Tricks”—it’s so good. It’s one of my favorites.

ES: I want to thank you guys and everyone else for coming out to that show. It was magic. ***

We’re working on another full-scale live-music-and-theater-and-dance extravaganza, to be performed next year as The Funk PeepShow. This year we’re gearing up toward the big theatrical production by doing some one-off club shows with different bands.

This past May we presented a Stax Nite at the Victory Grill with T-Bird and the Breaks, and the crowd and the vibe were insane. In early September we’ll be doing a Prince Nite with Foot Patrol. Christina Mason is co-producing these shows with us, and the girl thinks big — so we’re expecting an even bigger spectacle, and bigger crowd.

The Funk PeepShow dancers are different from those in the Tom Waits show, because our focus is different. And the band lineup will change slightly, too, for the same reasons: Since funk and soul is where our hearts live, we want to work with people who have the funk in their every thought and movement.

Bela Fleck and Sascha Paladino
Next