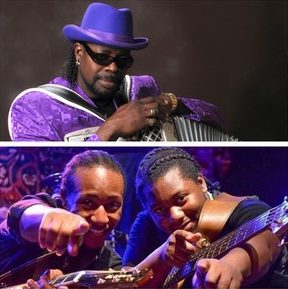 C.J. Chenier & the Red Hot Louisiana Band
Clayton Joseph Chenier was born September 28, 1957 – the son of the great King of Zydeco, Clifton Chenier. C.J.’s father was the first Creole musician to win a Grammy Award. C.J. spent his childhood in the tough tenement housing projects of Port Arthur, Texas. His earliest musical influences were an eclectic mix of funk, soul, jazz and Motown, and his first musical instruments were piano, tenor saxophone and flute. It wasn’t until his 21st birthday, after winning a scholarship and studying music at Texas Southern University, that C.J. first performed with his famous father and the legendary Red Hot Louisiana band.

On the road his father showed him how to front a world class touring band – teaching C.J. how to run the family business and how to develop his lifelong passion for music into a career. When Clifton died in 1987 his son adopted the Red Hot Louisiana Band and recorded his debut album for the great American independent label Arhoolie Records. As he told a journalist at the time, he does not try to imitate his father’s playing: “I play it the way I play it. All my father really told me was to do the best I could do with my own style.” In the following years C.J. would record albums Slash Records and the legendary Chicago label Alligator Records.

When Paul Simon recorded his 1990 album Rhythm of the Saints, he handpicked C.J. Chenier to play accordion (alongside Ringo Starr on drums) then asked him to join his “Born at the Right Time Tour”. A few years later C.J. showed up as a guest on the Gin Blossom’s “New Miserable Experience” album.

C.J,‘s 1995 appearances on the Jon Stewart Show and CNN brought C.J.’s music to his widest audiences yet. But all this attention didn’t change his philosophy toward his music. “You go to a gig by a jazz band,” he says, “and everybody’s sitting down, sipping drinks. You play zydeco and you see shoes flying off. You can’t come to my show and stay unhappy all night long. You’re going to break a smile and stomp your foot before too long. This is happy music, and it makes you dance.”

Nowhere was this more evident than the band’s 1996 appearance at theNew Orleans Jazz & Heritage Festival, where their raucous performance caught the attention of VH1, which featured Chenier in a segment on the event. Entertainment Weekly followed with a piece of their own. And a 1996 showcase at Austin’s SxSW Music Conference (as part of the Alligator Records 25th Anniversary event) swept the overflow crowd of music writers and fans at Antone’s into a massive dancing frenzy.

In the autumn of 2005, just prior to recording his latest album for Harmonia Mundi’s World Village label, the delta region of the United States was pummeled twice by vicious hurricanes that left much of Louisiana and large sections of C.J.’s hometown of Port Arthur, Texas decimated. In the aftermath of these floods – C.J. began writing and recording a collection of songs in a stark contrast to the upbeat nature of some of many his past recordings.

Inspired by Bob Dylan’s 1960’s collaboration with The Band – C.J. Chenier sought out an existing working band to back him during these sessions. Rounder recording artists The Tarbox Ramblers fit the bill with a combination of tight musical camaraderie, from years of touring, and a deep knowledge of American roots music history. Augmented by session pianist Joe Deleault, the musicians quickly rehearsed and recorded these songs in the cavernous Room A of Boston’s Q Division Studios in the autumn of 2005. Inspired by the 1950’s Rudy Gelder jazz recordings for Blue Note, and Zydeco albums of Clifton Chenier, the songs were recorded live with everyone playing together in the studio with minimal overdubs.

In essence this is C.J.Chenier’s first solo album as a singer-songwriter. Harking back to the deep southern roots of Creole music – C.J. has recorded a collection of some of the most urgent and heartfelt songs of his career. He tapped deep into his father’s songbook starting with the smitten sing-along hit Rosemary to the barbed wire blues of “Ain’t No Need of Cryin’” (Everyday is the Same) and haunting “Black Snake Blues”.The southern gothic images of Hank Williams penned “Lost on the River” and the devastating P.J. Harvey ballad “The Desperate Kingdom of Love” complete the somber canvas – a metaphor of the recent carnage in New Orleans.

But a C.J. Chenier recording, like a traditional New Orlean’s funeral, would not be complete without a tremor of hope for the future and a few great dance tunes. C.J. composed several classic songs for the album including the plaintive “I’ve Been Good To You Baby” and the swinging mea culpa “Who’s Cheatin’ Who?”. One of the album highlights is the Fender Rhodes driven – Living To Learn. Sans accordion and rubboard, Living To Learn highlights C.J.’s sixties soul and Motown influences. “As a teenager I played the Fender Rhodes in a top 40 cover band, practicing Soul Ray Charles, and Motown songs for 10 hours a day” recalls C.J.. Next C.J. leads the entire band through a Clifton Chenier tune “Bogalusa Boogie” as a tribute to the late great Clarence Gatemouth Brown. Gatemouth had died just days after Hurricane Katrina decimated his home in southwest Louisiana. The album ends fittingly with Van Morrison’s “Comfort You”, his great waltz-poem of healing and forgiveness, a fitting end to a stormy night.

“The Peterson Brothers are particularly adept at a smooth, funky, groove-laden type of blues that requires a mastery of both musical timing and onstage rapport. The fact that they’re succeeding on all fronts as teenagers makes it that much more impressive.” Elmore Magazine 2014

The Peterson Brothers were born and raised deep in the “Lost Pines” of Bastrop, Texas. Alex, 15, on bass and violin and vocals; and Glenn Jr., 18 on guitar and lead vocals are two brothers, one sound. Their music combines the classic blues sounds of legends with their own unique blend of soul-infused inspiration.

In just a few short years they have had the opportunity to open for B.B. King and the Willie Nelson, Los Lonely Boys. Lisa Marie Presley, and many more. They have also played with Buddy Guy, Michael Burks, Pinetop Perkins. The Peterson Brothers have also gained the attention of the legendary Bootsy Collins who has become one of their mentors.

The band has just completed their debut album “The Peterson Brothers ” with Michael Freeman, who produced the Grammy Award Winning “Joined at the Hip” by Pinetop Perkins and Willie “Big Eyes” Smith.

Although much of their time is spent honing in on their musical gifts, they put precedence on volunteering and ensuring that their academics are a top priority. The Peterson Brothers are on a mission to help “Keep the Blues Alive”.