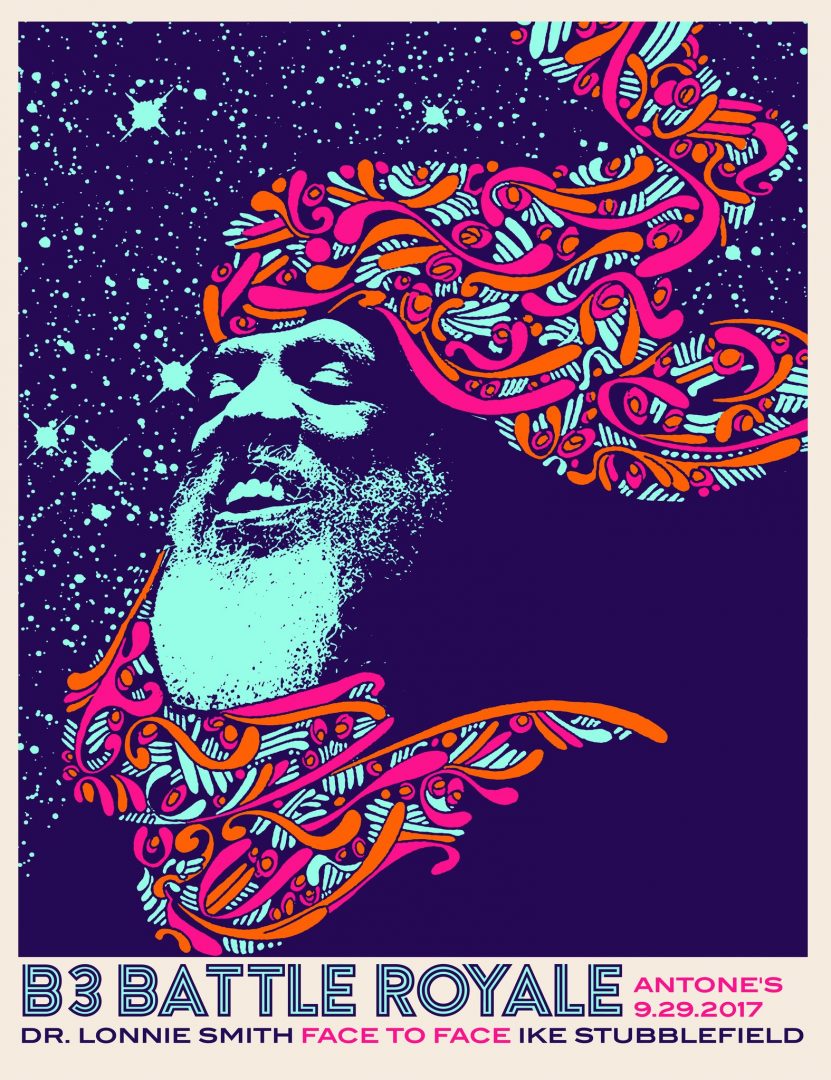 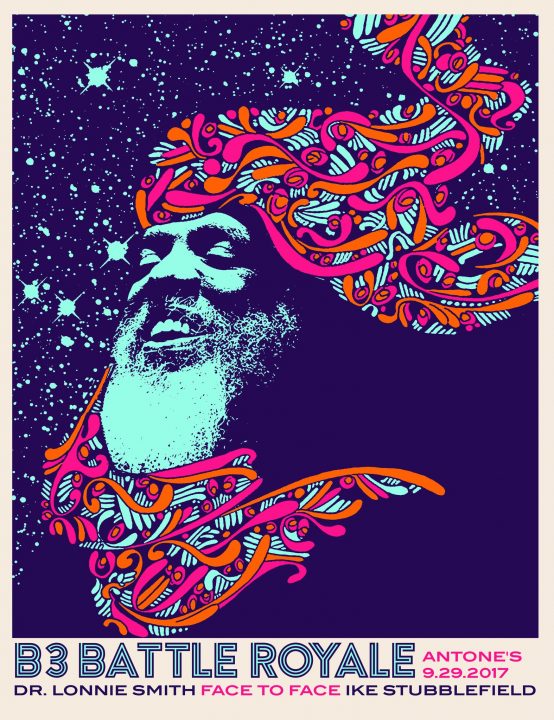 Dr. Lonnie Smith is an unparalleled musician, composer, performer and recording artist. An authentic master and guru of the Hammond B-3 organ for over five decades, he has been featured on over seventy albums, and has recorded and performed with a virtual “Who’s Who” of the greatest jazz, blues and R&B giants in the industry. Consequently, he has often been hailed as a “Legend,” a “Living Musical Icon,” and as the most creative jazz organist by a slew of music publications. Jazz Times magazine describes him as “a riddle wrapped in an enigma wrapped in a turban!” Always ahead of the curve, it is no surprise Dr. Smith’s fan-base is truly worldwide.

Born in Buffalo, New York, Lonnie was blessed with the gift of music. Through his mother, he was immersed in gospel, blues and jazz at an early age. In his teens, he sang in several vocal groups including his own–the Supremes–formed long before Motown’s eventual iconic act of the same name. Lonnie also played trumpet and other instruments at school and was a featured soloist. In the late ‘50s– with the encouragement of Art Kubera, who owned a local music store that he would visit daily–young Lonnie was given the opportunity to learn how to play a Hammond organ. By completely immersing himself in the records of organists such as Wild Bill Davis, Bill Doggett and Jimmy Smith, as well as paying rapt attention to the church organ, a young Lonnie began to find his musical voice. “Even though I didn’t know how, I was able to play right from the beginning,” Dr. Smith reflects. “I learned how to work the stops and that was it. It’s a passion for me, so everything else came naturally.” Because of Mr. Kubera’s kindness, Dr. Lonnie often refers to Art as his “angel.”

The Doctor’s first gigs were at Buffalo’s hottest jazz club, the Pine Grill, where he rapidly garnered the attention of folks like Jack McDuff, Lou Donaldson, George Benson and the booking agent Jimmy Boyd. George Benson was looking for an organist for his quartet and enlisted Lonnie. The group soon relocated to New York City, where they quickly established a reputation as innovators in Harlem clubs and throughout the area. After appearing on several Benson albums, Lonnie went on to make his first recording as a leader—Finger Lickin’ Good–for Columbia Records in 1966. Shortly thereafter, Smith was scooped up to record by saxophonist Lou Donaldson, for whom Lonnie would appear on several epic Blue Note LPs, including the million-seller, Alligator Boogaloo. Blue Note clearly liked what they heard and inked the organist to his own recording contract, a deal which would produce the soul jazz classicsThink!, Turning Point, Move Your Hand, Drives and Live at Club Mozambique (released many years later).

Since leaving the Blue Note stable in the ‘70s, Dr. Smith has recorded for a slew of record labels, including Kudu, Groove Merchant, T.K., Scufflin’, Criss Cross and Palmetto, ascending the charts many times. His unpredictable, insatiable musical taste illustrates that no genre is safe, as Lonnie has recorded everything from covers of the Beatles, the Stylistics and the Eurythmics, to tribute albums of Jimi Hendrix, John Coltrane and Beck–all by employing ensembles ranging from a trio to a fifteen-piece big band. Moreover, many of Doc’s recent compositions reflect dramatic ethereal qualities and orchestration that elicit movie scores or soundtracks.

Dr. Smith has been amused to find himself sampled in rap, dance and house grooves while being credited as a forefather of acid jazz. When questioned about his consistent interest in music some consider outside the jazz “mainstream,” Lonnie shrugs. “Jazz is American Classical,” he proclaims. “And this music is a reflection of what’s happening at the time… The organ is like the sunlight, rain and thunder…it’s all the worldly sounds to me!”

In 2012, Dr. Smith launched his own record label Pilgrimage Inc., and in 2015, resigned with the iconic Blue Note Records label. Dr. Lonnie Smith’s latest CD has been released on Blue Note. (2016)

Many awards have followed since 1969, when Downbeat magazine named Dr. Lonnie Smith “Top Organist” of the year. 2003-2014 he was awarded “Organist/Keyboardist of the Year” by the Jazz Journalist Association. The Buffalo Music Hall of Fame and Jazz Organ Fellowship have also inducted Dr. Lonnie, and in 2015 he received the Village Music Legends Award. He received the NEA Jazz Masters Award, the highest honor in jazz, on April 3, 2017.

Hammond B3 virtuoso Ike Stubblefield is a music industry legend. With almost 50 years in the business, you may think he’s seen and done it all, but he’s just getting started.

He cut his teeth backing Motown legends like the Four Tops, The Temptations, Marvin Gaye, Martha Reeves, Stevie Wonder and Rare Earth. He lent his soulful R&B style to Al Green, Ike & Tina Turner, Curtis Mayfield, B.B. King, The Pointer Sisters and George Benson, and helped create the classic B3 sound that others would imitate for generations to come. In 2010, he collaborated with Grammy-winning Atlanta soul man Cee Lo Green, recording organ and keyboards on 9 tracks.

These days, the B3 icon and mini-Moog master stays busy jamming with Papa Mali in New Orleans, rocking with Big Hat in Nashville and producing out of his Atlanta studio. Drawing from his recent time with the Derek Trucks Band and years on the road as a musician-for-hire, Stubblefield is finding his true passion collaborating with old friends and bringing the loose ends of an illustrious career together on his new project, The Ike Stubblefield Trio.

“I’m combining all elements of my 46 years of playing,” said Stubblefield. “My style’s kind of all over the place so it’s not a jam band, or jazz or funk necessarily, but it has all those elements.”