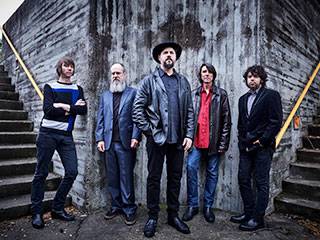 Drive-By Truckers have always been outspoken, telling a distinctly American story via craft, character, and concept, all backed by sonic ambition and social conscience. Founded in 1996 by singer/songwriter/guitarists Mike Cooley and Patterson Hood, the band have long held a progressive fire in their belly but with AMERICAN BAND, they have made the most explicitly political album in their extraordinary canon. A powerful and legitimately provocative work, hard edged and finely honed, the album is the sound of a truly American Band – a Southern American band – speaking on matters that matter. DBT made the choice to direct the Way We Live Now head on, employing realism rather than subtext or symbolism to purge its makers’ own anger, discontent, and frustration with societal disintegration and the urban/rural divide that has partitioned the country for close to a half-century. Master songwriters both, Hood and Cooley wisely avoid overt polemics to explore such pressing issues as race, income inequality, the NRA, deregulation, police brutality, Islamophobia, and the plague of suicides and opioid abuse. As a result, songs like “What It Means” and the tub-thumping “Kinky Hypocrites” are intensely human music from a rock ‘n’ roll band yearning for community and collective action. Fueled by a just spirit of moral indignation and righteous rage, AMERICAN BAND is protest music fit for the stadiums, designed to raise issues and ire as the nation careens towards its most momentous election in a generation.

Mike Cooley is somewhat more direct. “I wanted this to be a no bones about it, in your face political album,” he says. “I wanted to piss off the assholes.”

AMERICAN BAND’s considerable force can in part be credited to the sheer musical strength of the current Drive-By Truckers line-up, with Hood and Cooley joined by bassist Matt Patton, keyboardist/multi-instrumentalist Jay Gonzalez, and drummer Brad Morgan – together, the longest-lasting iteration in the band’s two-decade history. AMERICAN BAND follows ENGLISH OCEANS and 2015’s IT’S GREAT TO BE ALIVE!, marking the first time DBT have made three consecutive LPs with the same hard-traveling crew.

“This is the longest period of stability in our band’s history,” says Hood. “I think we finally hit the magic formula. It’s made everything more fun than it’s ever been, making records and playing shows.”

Drive-By Truckers might have maintained constancy but Hood embraced change by moving his family to Portland, OR in July 2015, a physical shift which he says “opened the floodgates” to a batch of deeply felt, strikingly emotional new songs. Having recorded the bulk of their canon in Athens, GA, the band was also eager to reinvent their own surroundings. Memphis was considered but when DBT’s November 2015 tour wrapped in Nashville, the band decided to spend a few days at the legendary Sound Emporium getting a head start on the new record.

Never ones to screw around in the studio, DBT cranked out nine new songs in just three 14-hour shifts, as ever with producer/engineer David Barbe at the helm. Coming in directly from the road put a head of steam behind the band, allowing them to lay it all out live on the floor, tracking songs like “Once They Banned Imagine” in little more than a single take.

“We realized we had most of the record,” Hood says, “so we went back after the holidays for four more days, but ended up finishing it in three. We tend to usually take about two weeks to make a record so this was really quick.”

“That was a lot of fun,” the Alabama-based Cooley says, “and a shorter drive for me.”

Speed was of the essence, as DBT was determined to get their record out at the height of the 2016 election season. By their very nature, Drive-By Truckers has always been an inherently political act, “but this is the first time it’s been out there on the surface,” Cooley says, “No bones about it.”

“I’ve always considered our band to be political,” Hood says. “I’ve studied and followed politics since I was a small kid. I got in trouble in third grade for a paper I wrote about Watergate – the teacher sent a note home to my parents saying I was voicing opinions about our president that she didn’t appreciate. That’s the one time I got in trouble at school where my parents sided with me.”

“SOUTHERN ROCK OPERA was a pretty political record,” Cooley says. “But we hadn’t had our first black president yet. We hadn’t sat in the bleachers and watched the backlash, which, as acquainted as we are with racism, went beyond what anyone imagined it would be.”

Political matters reared their head on 2014’s ENGLISH OCEANS, most explicitly on Cooley’s “Made Up English Oceans,” detailing the life and crimes of late Republican black ops master Lee Atwater. Hood further sharpened his own skills by penning an op-ed for the New York Times condemning the Confederate Flag and its vile role in Southern culture.

“That was a major learning experience,” he says. “Working with an editor, how to streamline what I’m trying to say, how to find the most powerful part and get rid of some of the excess. It was really grueling but I was eager to take it on and learn as much as I could from it.”

Hood delivered a finished draft to the Old Gray Lady and within moments, wrote the ferocious “Darkened Flags On The Cusp Of Dawn” on a borrowed guitar – his own gear in a moving van on its way to his family’s new home in Portland. The song, like so much of the album, is a direct response to 2014’s police shootings of unarmed African-Americans, a moment both Hood and Cooley see as the catalyst for their blunt new approach. Long haunted by the police shooting of a mentally ill neighbor in his former hometown of Athens, GA, Hood wrote “What It Means” in the heat of Ferguson, Staten Island, and the subsequent emergence of the Black Lives Matter movement.

“It was all in my head and just kind of bubbling at the surface,” Hood says. “I think we knew early on that was the direction this record was going to go in.”

Hood’s friend and collaborator for more than half their lives, Cooley was a on similar trip, reading, writing, and pondering the very same issues that rend the country in two.

“We have conversations about all this stuff,” he says, “but not necessarily in terms of planning an album or anything. Then we go home, he writes a song, I write a song, and they’re both basically about the same thing.”

“We tend to come to the same conclusions separately but together,” Hood says. “We don’t really discuss it until we have a bunch of songs. We’ve always been astounded at how much common ground our songs have, record after record. SOUTHERN ROCK OPERA is the only time we discussed a game plan for what we were going to write, the only time. It’s kind of uncanny. Truly a beautiful thing.”

Further creative inspiration came from a pair of American milestone pieces of art, Ta-Nehisi Coates’ National Book Award-winning Between The World and Me and Kendrick Lamar’s TO PIMP A BUTTERFLY, “in my opinion, the greatest musical work of our current time,” says Hood.

“It’s an inspiring album and one that made me question myself,” he says. “I’m a white guy from the South, do I have the right to be singing about this stuff? What can I do? The only conclusion I could come up with was maybe white guys, with Southern accents, who look like rednecks, need to say Black Lives Matter too. It’s a start, a tiny start, but a step in the right direction is better than no step at all.”

“I couldn’t not do it,” says Cooley. “I’ve got to speak about this stuff, somehow or another. And I’m going to speak about it from a middle aged Southern white working class evangelical background male point of view.”

Much like Lamar’s GRAMMY® Award-winning song cycle, AMERICAN BAND serves as a stark, tightly focused snapshot of today’s America, an exemplary illustration of rock ‘n’ roll as a vehicle for social commentary and clear-eyed reportage. “Guns of Umpqua” captures Hood’s reaction to the 2015 shooting at Roseburg, OR’s Umpqua Community College while Cooley’s breakneck “Ramon Casiano” is a topical folk rocker telling the little known tale of former National Rife Association leader Harlon Carter and the murder of 15-year-old Ramon Casiano. Known as “Mr. NRA,” Carter transformed the organization from its original role as a sportsmen and conservationist group into what Cooley correctly declares “a right wing, white supremacist gun cult.” A Southern-rooted band opening their album with such a song makes for a singularly powerful statement, the NRA’s monolithic control of the debate demanding opposing artists to be as overt and vocal on the issue as possible.

“The NRA needs to be turned into a political turd in a swimming pool,” Cooley says, “so all these fuckers will start paddling away.

“What I’m trying to do is point straight to the white supremacist core of gun culture,” Cooley concludes. “That’s what it is and that’s where its roots are. When gun culture thinks about all the threats they need to be armed against, what color are they?”

Of course the personal can also be politic, represented here by Hood’s deeply felt “Baggage.” Penned the night of Robin Williams’ death, the song sees Hood examining his own demons and long bout with depression, “the worst I’ve had as an older adult,” he says. “I was kind of blindsided by it. There had always been a tangible thing that I could point to as to what was wrong, but this time I was grasping for something and not quite finding it.”

AMERICAN BAND is surprisingly optimistic thanks to Hood’s “absolutely” improved mental health as well as Drive-By Truckers’ passion for the issues behind the material. The band intend to hit the road harder than ever in support of AMERICAN BAND, bringing their songs to the people as they have always done, only this time with the country’s very future at stake. Fortunately for America, Drive-By Truckers are, as a Great Man once said, fired up, ready to go.

“I feel like Cooley and I both nailed what were going for on every song on this record,” Hood says. “I don’t think there’s a wasted line or word on this record. There’s nothing I would change, that’s for sure. I think we got this one right.”

“I’m sure there will be people saying ‘I wish they’d keep the politics out of it,’” Cooley says, “but one of the characteristics among the people and institutions we are taking to task in these songs is their self-appointed status as the exclusive authority on what American is. What is American enough and who the real Americans are. Putting AMERICAN BAND right out front is our way of reclaiming the right to define our American identity on our own terms, and show that it’s out of love of country that we draw our inspiration.”