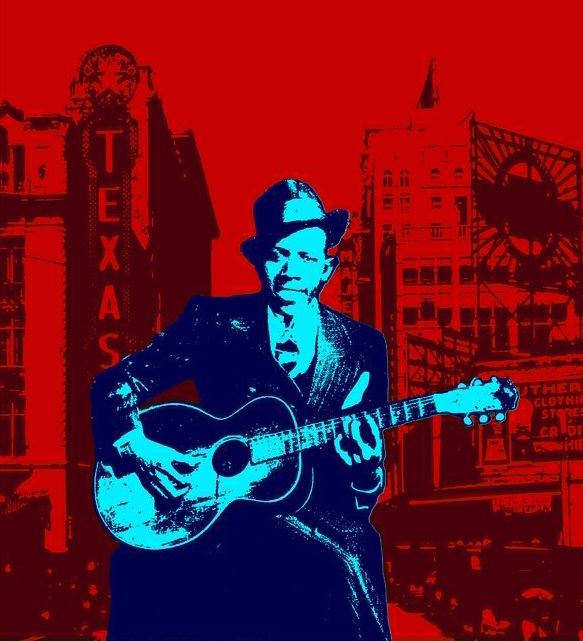 The recording sessions made by Mississippi Delta bluesman Robert Johnson in Texas in 1936 and 1937 rank among the most important events in American music history. That those 29 essential songs were recorded in San Antonio and Dallas gives gravitas to the Lone Star state’s already unique music history. This period of Robert Johnson’s life, a man of mystery and accomplishment, is examined in the traveling photo exhibit Robert Johnson in Texas 1936 and 1937, opening at Antone’s on July 1, 2017.

With only two authenticated photographic images of Robert Johnson and a sketchy history of his short, tragic life, it’s the 29 songs he recorded between November 1936 in San Antonio and May, 1937 in Dallas that tantalize about a man dead at 27. While the Harlem Renaissance burst forth in the North during the Thirties, Texas and the South were largely the land of Jim Crow. Raw, memorable, dark, compelling, his legendary songs stoked the imaginations of blues lovers for decades.

The facts are simple and short: Robert Johnson was brought to San Antonio, Texas in November 1936 to record for the American Recording Company with producer Don Law. That session spawned a minor radio hit in “Terraplane Blues,” enough for ARC to send Johnson back to Don Law to Dallas to record again in May of 1937.

Johnson seemed to enjoy his rising success after the recordings in Texas, touring with Johnny Shines, playing outside the Delta, and
​rising as a feature act, but by summer 1938 he is back in Mississippi where trouble begins. By August 1938, he is dead.

Robert Johnson in Texas 1936 and 1937 builds first on the two authenticated images: the famous Memphis studio Hooks Brothers promo photo of a dandily-dressed Robert Johnson and the iconic photo-booth shot with a cigarette and guitar. Was that photo booth in the Kress’s next to the Gunter Hotel in San Antonio? Yet, even these photos are latter finds. In Columbia Records’ vinyl releases of the Robert Johnson catalogs in two parts in 1961 and 1970, Johnson’s face is not depicted because the photos had not been located until the 70s.

So other images tell the stories of the Texas of Robert Johnson – maps of San Antonio, Dallas, and Texas that follow from Mississippi through the South, newspaper articles of the times, images provided by the Mississippi Blues Commission of landmarks to his life, additional art reflecting a broadening black perspective. Still, questions linger:

Robert Johnson in Texas 1936 and 1937 was conceived and curated by retired Austin Chronicle editor and writer Margaret Moser, who founded Tex Pop in 2012. After her cancer diagnosis and retirement following a glorious waltz through over four decades of rock & roll journalism and directing the Chronicle’s Austin Music Awards for South by Southwest, Moser moved to San Antonio to continue her passionate dance with music at Tex Pop. 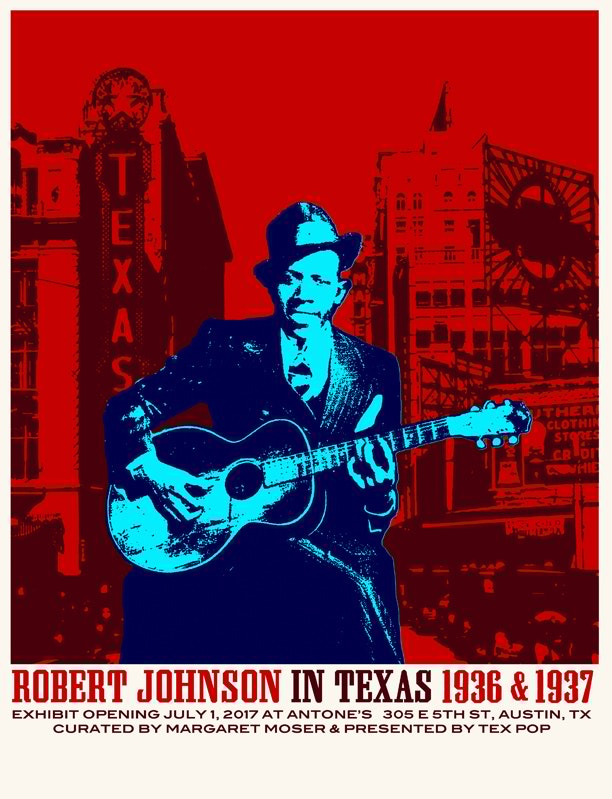