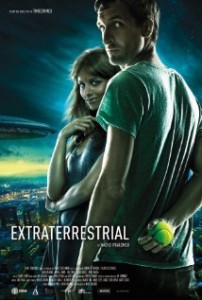 Julio wakes up in Julia’s apartment. They are strangers. Julia is cleaning up after a night of who-knows-what which neither of them can remember. She’d like Julio to leave. Problem is, while they were passed out, a giant UFO descended upon the city prompting massive evacuations. Those who didn’t get out in time are now stuck where they are with the 4-mile-wide flying saucer hovering menacingly in the sky above them. Julio quickly parlays this into an excuse to stay with the girl.

Complicating matters is the sudden appearance of Julia’s sweet but clueless big oaf of a boyfriend, and her tragically obsessed next door neighbor who declined to evacuate because he knew Julia was still home. There they are… all together.

With delightful performances from Julian Villagran (Julio) and Michelle Jenner (Julia), this odd little comedy is very likely to win over any audience members who stumble in expecting an alien-invasion action flick.

The film unfolds like theatrical farce as the characters struggle to maintain secrets, one-up each other with snappy bon mots, and deal with ever-shifting loyalties.  Writer/director Nacho Vigalondo, known for his complicated, edgy sci-fi film called “TimeCrimes”, does something completely different here: he uses the specter of something big and weird going on outside to enable human comedy and drama to unfold inside.

Extraterrestrial’s simplicity is its genius.

"A Lonely Place to Die", a Fantastic Fest review
Next