“Follow” … See This Film. All Kinds of Wrong in All The Right Ways

This week I am immersed in the Austin Film Festival, which is a screenwriting conference and film festival. This is my fifteenth year in the audience. There have been some amazing films  at this fest over the years. Primarily this is a festival that focuses on screenplays and screen writers.
That being said the best screen play I’ve seen so far this year was at Fantastic fest 2015. The film that I was attached to is called “Follow.” 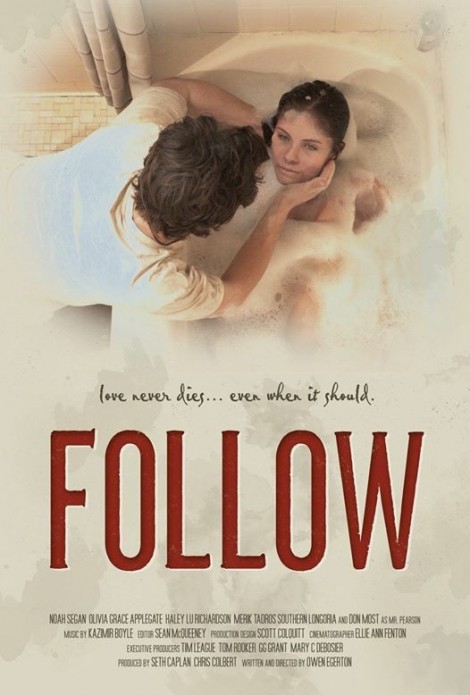 It was written and directed by Owen Egerton . Yep, that guy. The ref from the fantastic debates! This film was the best thing I saw at fantastic fest,( besides that kill in “Tale of Tales”). I’d even go as far to say it’s the best thing I’ve seen all year! The reason why this film stands out to me is that it was translated to the screen so well. It was dark and twisted in all the right ways. Almost as if it was made in the golden age of film, the 1970’s. I say that because they seem to have pushed the boundaries and gotten away with some super creepy stuff. The film took you in directions that are unexpected and makes you feel the confusion the main character feels. Owen Egerton is a Masterful writer and his story (I think he said it came from a few stories in the Q&A) made its way to the screen. Usually films lose so much when they are transferred from stories. This is his first time at bat too. I purposely did not talk about plot. The only way to see this is blankly. Know nothing, watch no trailers. Trust me.

How I first met Owen is kind of a mystery to me, but I think he was a guy that got in touch with me over email an wanted to write for the Austin Daze, when we were in print form. He wrote for a few issues, we became friends and then I found who he really was. Owen is also a comedian. He is a  guy who is bursting with a lot of creative talents. Reading through this article, I think I figured out why Owen is such a good filmmaker. In his his comedy routine, he studies and takes apart films so he knows what works and what does not. He understands the medium. I look forward to seeing what he does next.