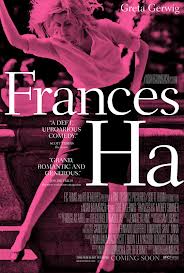 It’s rare these days to view a film and wish it was longer, especially with most films running over two hours long. Frances Ha, with a short run time of less than an hour and a half, is a surprisingly fresh story about a struggling twenty-seven year old dancer/choreographer bouncing around New York City looking to find her place in the world. Filmed in black and white, Frances Ha plays out like a hipster version of a Woody Allen, slice of life type of film. At first glance, Frances Ha seems less like a coming of age story and more like a glimpse into the soirées of a woman-child.

Frances Ha is Co-written by Greta Gerwig and Noah Baumbach (The Squid and The Whale, Greenberg, & collaborative works with Wes Anderson) and follows a story about an adolescent woman, Frances (played by the adorable Greta Gerwig), rife with mishaps and missteps (literally in one scene thanks to our old friend slapstick). Frances is a bubbly, quirky, and awkwardly charming character; somehow she shines on through self-inflicted adversity because no matter how rocky things get for her, she maintains her resolve to thrive and just be herself.

The first scenes set the pace for the entire movie with montages following Frances and her straight laced best friend, Sophie (played by Mickey Sumner/daughter of Sting) around the city on their zany escapades just to have them end up falling asleep in their sardine-box Brooklyn apartment. This film never falls short with surprisingly smart and witty dialogue and a fittingly bolstered cast to balance the unbalanced Frances.

It is especially nice to see that Frances Ha mostly leaves out the “romantic” aspect of the comedy and focuses more on Frances attempting to get her life together without becoming diluted with love triangles (with the exception of the glaringly obvious, yet never declared, yearning that Frances seems to have for Sophie). Frances is often referred to as, “un-datable” by one of her roommates, possibly due to her peculiar disposition.

In some ways, Frances Ha teeters between quirky and just plain sad. In one particular scene Frances is ascending on an escalator to leave her family after a holiday visit in Sacramento. We see her hopeful smiles and waves of goodbye turn to a dismayed frown of discontent. Frances is likeable and is compelling because the audience can empathize with her pursuit of happiness, it’s just not clear what happiness means to her.

The only negative critiques are focused around the rushed resolution of the movie and the seemingly unnecessary location changes. For example, moving to Poughkeepsie as a place to reset and live in a dorm of her former College as a resident assistant; where she happens to run into her best friend Sophie, who had been living in Japan. Frances has an aha moment after speaking with Sophie and makes her way back to New York City. She quickly finds her bearings and everything miraculously falls into place for her. In the final scene, the audience is given their own aha moment as a cheeky testament to the films brand of humor.

Man of Steel is Super, Man
Next