Getting Through The Daughter 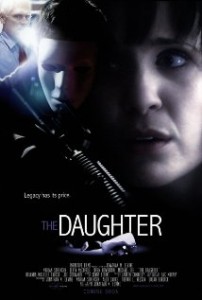 The Daughter does not bring anything interesting to its suspense/thriller genre. There are a lot of elements in a low budget movie that can be forgiven. If the story is somewhat captivating, the writing is quality, the directing is solid, and the protagonist is intriguing, you can get past the bad sound quality and grainy texture of the picture. Unfortunately for The Daughter, it does not have any of these aforementioned characteristics and cannot be so easily forgiven.

The story is about Rian Fielding (Marian Sorensen) the daughter of a wealthy mayoral candidate for some undisclosed town. Rian is the perfect political daughter, speaking to the town on behalf of her father with a poised attitude and determination to see her father succeed. Tom Fielding (Kevin McCorkle) shows up to the presentation just in time to address the townspeople. Someone in the crowd brings up Macefield, which Tom responds to with vagueness (such a politician), so the audience does not know what Macefield is, or the significance of it until the third act of the film. After the conference, we find out that today is Rian’s birthday. Her father recommends that she has a party at their home after meeting up with her boyfriend for dinner. We then get to see a glimpse of reaction on Rian’s face when she realizes she has forgotten all about her boyfriend.  After Rian is abruptly broken up with, after an exchange of vague facial expressions and an awkward crying scene in a car, she goes home to find her other friends waiting for her. After a fun filled night of sitting on the couch with her friends reminiscing about silly nicknames from grade school and getting bad relationship advice, Rian has had enough and goes to bed. A short time later, Rian hears a baseball bat crash through her window so she runs downstairs to call the police and inform her friends of the intruder, who don’t take her seriously of course.  After this, we hear the doorbell ring and Rian answers it to find “security” answering her distress call. She lets them in to find out that they are a band of four kidnappers who want to hold her and her friends ransom for millions of dollars. For some reason, one of the guys has a mask on, while the other three assailants are not wearing masks.

Even if The Daughter was a good movie, one could not tell because of the most distractible and relentless MIDI score that drones on in almost every scene.  Visually, everything has a glowing hue because of over lighting. The camera shots are boring, the dialogue just builds a convoluted story that you don’t have interest in, and the acting was strained at best. The only redeeming thing about The Daughter is one scene, where Rian runs up the stairs to her room with her friend in order to evade the kidnappers. She then opens her bedroom window and helps her friend and herself up the crawl space in her closet. It’s rare, even in a good movie, where the distressed captives actually use their brains to get away even if only temporarily.   There is also an obvious twist at the end of The Daughter, but if you pay attention, you can see it coming after five minutes into the film because of the transparent dialogue.

Fast and Furious 6 Wears and Tears
Next